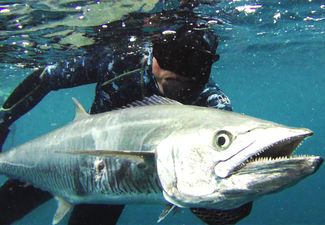 Even though it's been a week or so since this competition took place we wanted to share some info with you on this popular Australian Spearfishing event.

Despite being limited to only one day of diving, the 2012 Australian Bluewater Freediving Classic proved to be as successful as ever.

Battling a massive southerly front that was moving up from the Tasman Sea divers looked to take advantage of any opportunity to get out into the water.

Competitors required all their experiences to handle the tricky surrounds of diving close inshore to Norwest, Groper and Split islands.

Simon Latta came home in a close second with Wahoo over 20kg while local Justin Ward did well to claim third.

One of the competition highlights was the weigh in at Woolgoolga with many locals getting involved as the fish were scored and then auctioned.

All money raised from the auction went to Marine Rescue NSW and the Woolgoolga Rotary Club.