64 divers in 18 boats turned out from as far South as Coffs Harbor, and as far North as Gladstone, to compete in the inaugural 2013 Couldwell Cup Spearfishing Challenge on the 4th and 5th May.

All those that knew Greg Couldwell will attest to his passion and deep affinity with the underwater world. Greg’s spearfishing mates will tell you he was the sort of bloke that would do anything for you and that his enthusiasm for spearfishing was contagious. Tragically, Greg passed while spearfishing off Moreton Island in May 2012.

The competition places a great emphasis on safe, sustainable and selective spearfishing.  The scoresheet and pairs format was designed to limit the take while still ensuring an interesting (and delicious) mix of species.

One major step that sets this competition apart is that it’s a ‘pairs only’ competition.

There has been no major competition in Australia that has wholly embraced the pairs format – until now. The pairs format enforces ‘buddy diving’ and the winning pair share the glory together.

The species list was very unique with only highly prized species being targeted with high minimum weights that had to be obtained to enable the fish to be eligible for weighing in the comp.

The organisers had obtained some fantastic sponsors with the overall prize pool of over $10,000 for the event including the major prize from Freedive Fiji in which the overall winners of the prize would receive a trip for 2, to Fiji. This would include 4 nights’ accommodation as well as a 2 day spearfishing charter with all meals to be looked after during the trip. This prize was worth over $3500 alone. Some of the sponsors included:

The Couldwell Cup was to be run over the weekend of the 4th and 5th. A briefing was held on the Friday night at 7pm with registrations and information about the event explained. Competitors were to assemble each morning at 5am the Moreton Bay Boat Club launch their boats and complete sign on with start diving time at 7am and be back at the weigh in and sign off by 1600.

The Couldwell Cup Spearfishing Challenge is a competition that focuses on quality, rather than quantity. Competitors team up with a partner and compete as one unit; this enables the competing pair to weigh in 1 fish from each of the species listed. Competing pairs have to carefully consider which fish from the species list to target, ensure it is of weight, making this competition a great opportunity to test your selective spearfishing and hunting skills. Pairs will also receive bonus points if the fish goes over a certain weight which is chosen by the club committee.

The venue for the event was the Moreton Bay Boat Club in Scarborough, which has facilities that are ideal for a spearfishing competition such as a weigh in area, bar, ramp and wash down area as well as hot showers.

The weather forecast in the week prior was varying from spectacular to ordinary. Come Friday night the briefing at 7pm a clearer forecast was had, showing light and variable conditions on Saturday with Sunday looking unlikely to be utilized.

The run across Moreton Bay was very calm with a slight Southwesterly at our backs with only a hint of swell at less than 1.5m offshore. The visibility varied throughout the day with reports of less than 12m being heard, however generally most visibility stayed around the 15-20m with some at 25m and a balmy water temp of 24*C. 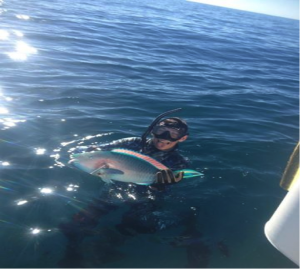 Juniors had a blast at the competition.

Some of Australia’s premier spearfishers competed in the event with the Australian Spearfishing Title holder Ben Thompson and his regular dive partner Ryan Springall, Bryson Sheehy and Daniel Mann, Tony Heugh and Guy Wood just to name a few.

Come 4pm all boat had returned to the weigh in area to sign off and weigh in their catch. It was apparent by the bulk of some pairs catch bag that some people did better than others. With the air of excitement to see what people had to weigh with what species were seen and landed. During the weigh there was a plethora of different species from mangrove Jack, Pearl Pearl, Mu, most types of Parrotfish, Goldspot Wrasse, Green Jobfish, big Blackspot Tuskfish and the odd coral trout weighed. On the Pelagic front there was the ever present Yellow Kingfish and Spanish Mackeral which were hard to find this year, as well as the odd Rainbow Runner, Trevally and Sampson fish weighed in.

The decision was made that afternoon by the Committee to cancel the Sunday due to strong winds and unfavorable conditions. This enabled people to pull out their boats and get changed out of wet cold wetsuits and into suitable attire for a beverage on the MBBC deck.

Presentation had been moved forward to 7pm with a buffet dinner. After a few formalities being undertaken by the committee to organize the 100 odd people in the function room, it was down to a good feed and name the winners.

With 4 teams jockeying for top spot, including owner of Adreno Tim Neilsen in one team, with only a few hundred points separating the teams it was a tightly contested competition. Several great fish were landed with several Blackspot Tuskfish over 10kg weighed, a 7kg spangled emperor, 17kg Samson fish, 13 kg Golden Trevally, 8kg Coral trout and a couple 3kg Goldspot Wrasse and 2kg Seabream, just to name a few

The results were as follows 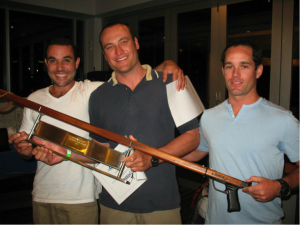 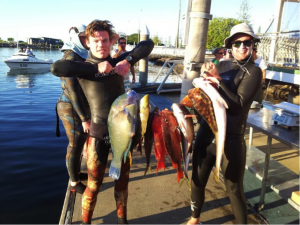 Raffle – Esky, Bottle of Scotch and other prizes 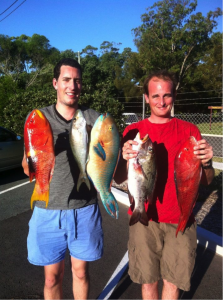 Most Meritorious Reef Fish by Rhys and Kyle

All in all the entire event was a massive success with the format and venue being something competitors enjoyed. Given that 2013 was the first Couldwell Cup Spearfishing Challenge the Couldwell Cup 2014 will only get bigger and better with some great sponsors already onboard and competitors already signed up for next year. The cheap registration fee of $75 per competitor was very reasonable considering you receive a t-shirt, full buffet meal, ramp access and registration to the event. We hope to see you all then!