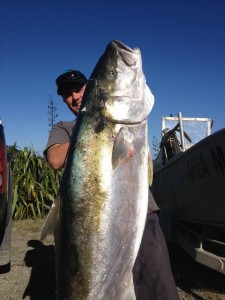 Nick Boulgaris with his record-breaking Kingy

Professional kina diver, Nick, 27, stopped at one of his favourite spots off Whangarei to get a Kingfish to smoke for dinner. After his first dive, he was followed to the surface by the record-breaking fish and the hunt began. With a good holding shot on the fish, the 20 minute pursuit then began, with Nick pulling the fish in from his float line, only to have it take off again. In true Kingfish style, the brute was unrelenting, but so was the diver and by the time he had the fish in his hands, he was too exhausted to lift it in the boat! 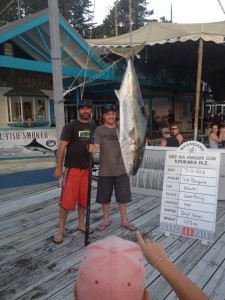 The fish is now in a large freezer awaiting a taxidermist to prepare it for mounting.

The record Kingfish will take pride of place on a wall at Boulgaris' home, between several stag heads.

Needless to say, after heading out for fish to eat, Nick ended up having a hamburger for tea that night.