The Skipper pulled anchor as soon as light broke and we were steaming off to Broomfield Reef while we enjoyed bacon and eggs along the way. Tim N, Robbie, Tim L and I headed off to explore a mark they had found on a previous trip. As soon as I entered the water I was faced with the sight of 10m high bommies, protruding upwards from the 15m deep crystal clear water. The fish here were a bit flighty, and the current strong, but the guys managed to get some great trout nonetheless.

I asked Robbie if he could point out a purple cod to me if he saw one, as I’d never encountered them or if I had I hadn’t recognised them. Within a few minutes he’d spotted one, and ten minutes later we saw another one. It surprised me that they seemed to just cruise around in the open, I expected them to be hiding, but as soon as you even glanced their way they’d slowly move off, always out of reach. How annoying! 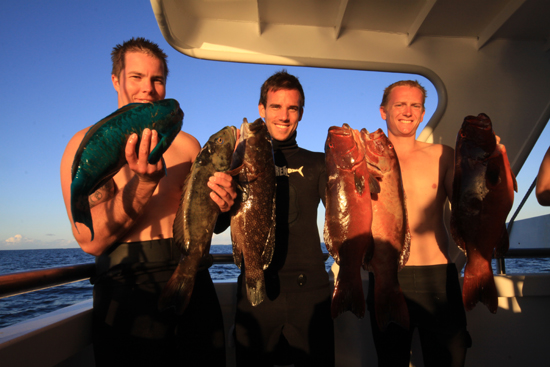 Tim L was line fishing from the boat while we drifted along in the current. Tim N and I were getting further and further away from him though, in fact we were a lot closer to the main boat than our tender! The beautiful big bommies had faded away into nothing but sand and, though I did spot an old fishing rod laying on the ocean bed, there was nothing else around. Tim N started putting his gun in the air and yelling to Tim L, trying to get his attention. “I’m not worried or anything” Tim assured me as we drifted further and further away from our fishing boaty “We’ve just drifted off the good ground”.

He told me we should start swimming across current, so that we would end up back on the main boat. We didn’t quite get there though, and our boaty came and picked us up. It wasn’t until later that Tim told me a biiiig shark had swam to mid-water column to check us and our trout out! That was when Tim had started calling out to our boat. I hadn’t seen the shark, and Tim didn’t want me to worry! 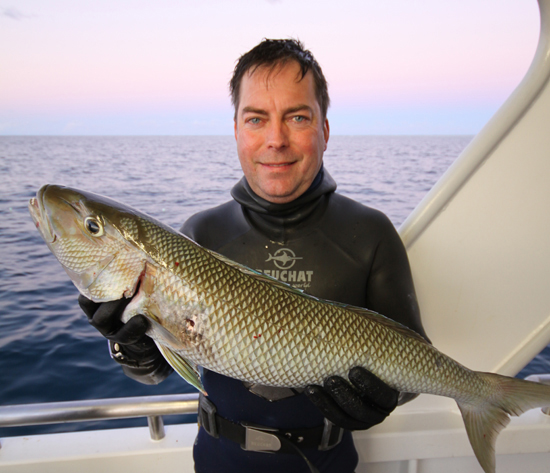 Many of the common Bunker Group targets made their way to the filleting boards that morning with some great tusky's, trout and spangled emperor brought in, as well as Gus bagging a beatuiful rare Oscellated Cod! After lunch it was my turn to go boaty, and Tim L and Tim N brought in some beautiful big green jobbies, coral trout, purple cod and coral cod as the sun set on another magical day in paradise.