﻿﻿﻿I sometimes ponder on what my life would be like if I had never gotten into spearfishing, if I’d never met that group of guys at the pub, who just wouldn’t stop talking about spearfishing over a game of pool with my brother. Since that fateful day in 2010 my life seems to have blurred into one massive adventure after another. I guess that’s one of the great things about spearfishing. There’s always somewhere new to explore, always another goal to chase and always another interesting person to meet.

So when Tim Neilsen, owner of Adreno, casually invited me along on my next big adventure – the annual Adreno spearfishing trip, heading on a charter to the bunker group off Gladstone for five days packed full of all the fishing and spearfishing I could dream of – there was no way I was thinking twice about it! Studying for my law exams was going to have to wait, this was a trip too good to pass up.

Saturday night saw 16 guests boarding the Eastern Voyager, a 100ft, 24 bed charter boat that we would call home for the next five nights. After the long drive from Brisbane we all headed to the pub for a meal before settling in to the massive luxury boat. By 11:30pm we were steaming out to one of the world’s seven natural wonders - the Great Barrier Reef. 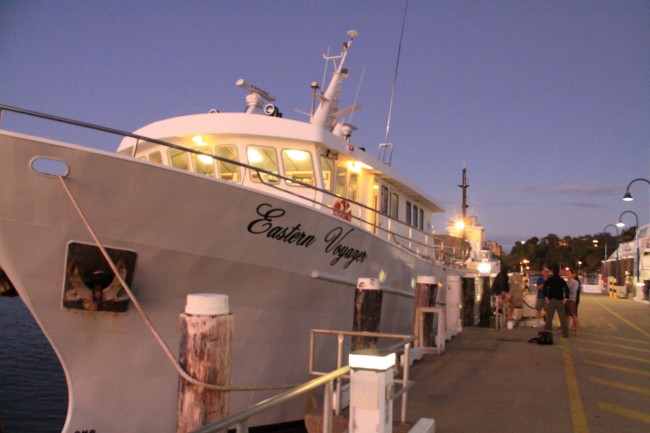 Day 1 – Sunday After waking up in the middle of the ocean, no land in sight, we wasted no time suiting up and heading off to explore Douglas Shoals. It wasn’t quite the glass off we’d predicted and the 15-20 knot winds and very choppy oceans, coupled with cold rain, turned more than a few of the crew green. I was in a boat with Tim Neilsen (Tim N) and Tim Lucas (Tim L). Tim L opted to go boaty for the morning.

After a couple of trial and error spots we managed to find some good ground. Tim N had just dived down when I did a quick 360 degree scan of my surroundings. To my surprise, a school of 10-15kg Spanish Mackerel had crept up behind me! They were close enough to shoot from the surface, and practically right on my fins. I looked to Tim as he descended, but he didn’t seem to have noticed the stealthy school (I later found out this was just his tactic of keeping them interested!).

I had just silently slipped below the surface when I heard Tim’s gun go off, and saw a flash of silver to my right – he was on. But the Spanish were spooked, I was going to have to rush a shot at one slightly below me. I aimed for between the two dorsal fins and squeezed the trigger – got him! But I couldn’t see how much of an angle the spear had gone in on and to me it looked like it was only holding on by a thread. Tim N and I broke the surface and he called to Tim L “Spaaaniolllaaa!!” as our two Spanish took us for a ride. I waited for Tim N to get his Spanish in the boat and then we chased mine down and I held the line tight as Tim N placed a perfect second shot (on closer inspection I apparently didn’t even need the second shot – but better safe than sorry!). We got the pair of 12.5kg Spanish in the boat. I was stoked, my first Spanish! But I wasn’t completely satisfied, as I’d had a lot of help – the next one would be just mine. 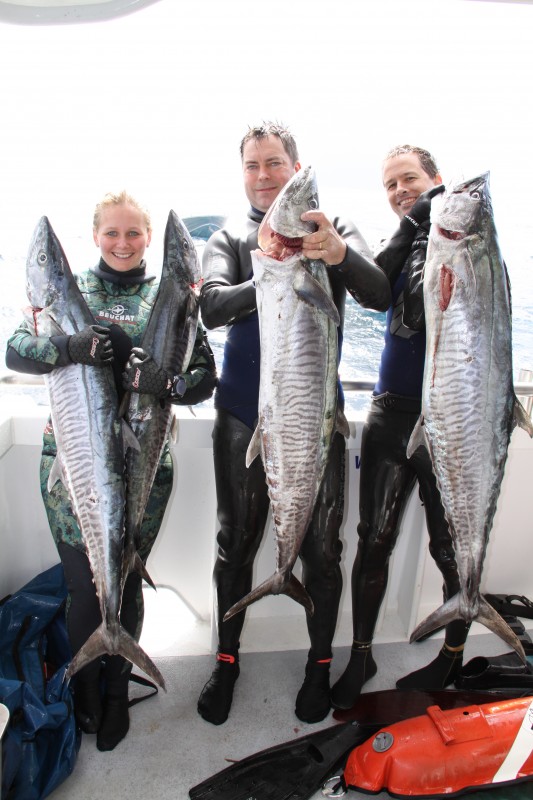 We swam on and within a few minutes another Spanish cruised into sight. Tim and I dived at the same time – but the cluey pelagic was onto us. It darted away from Tim, and I deliberately looked downwards, and swam parallel to the fish, feigning disinterest – it worked, and the Spanish swam right into the path of my spear. I squeezed the trigger, this time getting a perfect shot straight between the dorsals – he wasn’t getting away. I was able to pull him in quickly and hand him to Tim L in the boat, more satisfied now that I’d landed my first unassisted Spanish, weighing a cool 11.6kg. Tim was on too and before long we had four Spanish in the boat!

Tim N managed to pull in a nice trout and tusky after that, but the rain was coming down hard and the wave height had picked up. There were a couple more Spanish brought in that morning, but Robbie’s was the biggest at 20.4kg. There were also some fantastic red emperor landed, with Tim Thomas getting the biggest at a beautiful 7.4kg! Despite being a fishy spot, the decision was made that we’d have to move on to more protected ground. The skipper steamed ahead to North West Island while a few of us had midday naps.

We were awoken by the sound of the anchor dropping. Changing spots had worked a treat and we were now faced with beautiful conditions. We had a few hours to get some diving in before dinner. Not much was brought in – Tim N got a nice red emperor and tusky, and there were also a few trout and crays nabbed. But the current had been tearing, making it hard to place a shot with the knowledge that if your spear became lodged in coral it would be a major pain to get out. It was a nice way to view the reef anyway, sitting on the bottom being swept along, watching the various species flicker by.

Day two was fairly successful and everyone had a great time, but now that we’d blown the cobwebs off our gear, we were sure it could only get better.