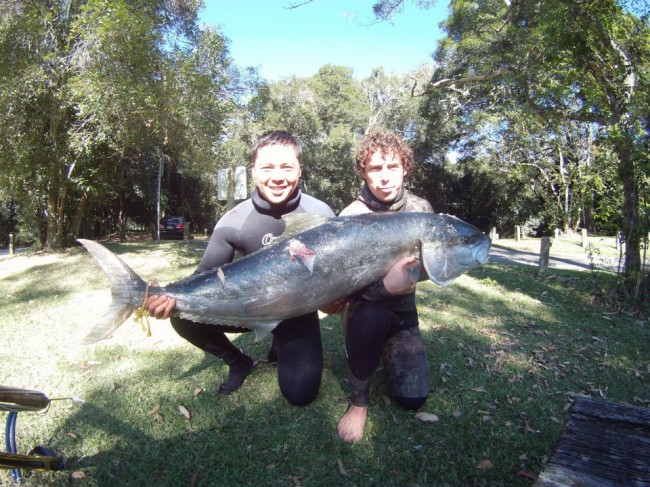 It was 5pm Thursday 17 may, I had to get ready for a memorial for my cousin who had passed 20 years ago at the age of 20 whom coincidently also loved spearfishing. As I was getting ready I got a call from Max asking me to drive the 3 and a bit hours south down to Jervis bay to dive with him not serious at all I said I’ll think about it if I can get someone to go with me to half the cost of fuel after all it was going to cost me $60 in diesel alone which as many know on a uni students budget is a lot. In Church during the memorial a photo of my late cousin was shown of him holding up a Spanish mackerel almost as tall as him caught from Wollongong of all places! My decision was made; as soon as I got home I rang max and said I would be at the car park at 5-5:30 depending on how the 2.8l diesel slug Toyota 4runner would go with all the hills on the way.

5:15 I get to the Car park. Freezing cold I recline in my seat and wait for Max. Shortly after Max arrives already in his wetsuit and he laughs at me shivering as I have to get into my suit. The comfort of living so close to the sea. The twenty minute walk out warms me up. As we get to the spot we lay back waiting for the sun to rise and reminisce on how we got into diving,  dives we had done together and most importantly the plan for the day.

We swim out to the spot seeing many good reef fish that I just watch swim by I would usually take them for a feed but I didn’t drive this far to take fish I could shoot much closer to home. I am excited that the vis is a good 10-12m but max says the vis is bad, they are spoilt down there! Out at the spot in about 15m of water we had to dive a few meters to see the bottom and I remember thinking I have never seen this much yakka in one spot in my life a good sign for sure. It was hard though as there was so much bait we could not decide on one spot to stay so we stayed moving with the large schools. I had seen one king out of range. As I was in a 3mm suit I was starting to get cold so we give it 5 more minutes than swim in. on the way in A king fish swims at us from our 3’oclock max dives as he is closer but by the time he gets down the king has passed him and has presented me with a perfect shot in the shoulder as Max had the shot though I didn’t fire the king gets out of range for max he pulls his gun back in and I dive and have a shot that falls short.

Note to self: Gun rubbers lose power if left on without changing for over a year! We hang around a bit longer then swim in funny after seeing that kingfish I was no longer cold. In September I shot my second king fish at 10.3kg and I hadn’t seen a decent one since. The promise of another was exciting to say the least and when back on shore I wasn’t ready to give up so max suggested a second spot. Great decision Max!

Familiar with some of the ground we shot some salmon and I got a red rock cod for a feed, then we proceeded to a bommie Max had explained to me before on the phone but it would be hard to find without someone who has been there before. On the way out to the bommie I dive and see a kingfish on the edge of vis I signal Max who had been watching me. And we continue on with plenty of current and bait on the bombie we stay around for about 20 minutes starting to get cold again and with a 3 and a bit hour drive back home, I tell Max another 5 minutes. He tells me he will do another 3 dives.

I watch him do his first dive while I save my energy for the swim back in. his second dive I watch him slowly angle towards a big rock on the bottom at about 7.6m he lays there I see him aim his gun tracking something he pulls his gun in towards him and taps his gun the I see him pull the trigger and I see his gun get taken out of his hand about 2 feet with each kick of the fish’s tale. I dive towards Max as whatever he may have shot may have friends but nothing there. I see Max grab his floatline he gets towed around me effortlessly I then look to my right and I see what he has shot the biggest kingfish I had ever seen in person. My initial thoughts were along the lines of ‘WHAT IS THAT!’ It was not happy swimming in circles around a rock on the bottom. I see Max’s shot it is solid but the shallow water was a worry with such a beast!

I swim after Max trying to hand him my gun for a second shot as he had discussed this earlier already out of breath as I had dived hoping to shoot my own fish and now chasing max around he yells I can’t shoot it you will have to I dive and somehow miss the shot! I reload quicker then ever before I don’t think I even put the shooting line on properly but the king has tired now at least and so I dive and put a second shot in that exits through the gill plate.

I surface and am greeted by Max’s screams and I do the same. High fiving like little kids and just enjoying the moment.

We start swimming in Max bear hugging his fish with his gun unloaded and float right next to him. I have my gun loaded in case something decides it would like a free feed. Somehow max beats me on the swim in it must have been all the adrenaline pumping through him. We get to the rocks and I laugh at Max struggle to get the fish out of the water onto the 1m high rock platform.

Once on the rocks we get to see the fish and estimate it at 25-30kg then we begin the 2km walk back I offer to carry the fish back and Max carries my gear. I think he got the harder job really. On the walk back in we pass a young couple the male points at a salmon Max had shot and says ‘he shot a salmon’ we kept walking and had a laugh at how they both somehow managed to not notice the monster on my shoulders! 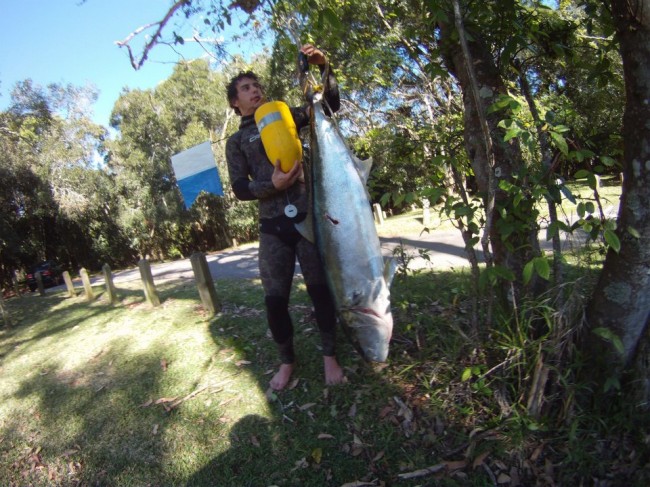 Once back at the car many photos were taken and I Remember I had walked out my back door to get my fish scales at 2am that morning. I get them out of my car and we weigh the fish on the scales and see 30kg but the fish was still touching the ground! we hang the scales higher and then re weigh the fish 33.86kg we looked at each other cheering once again. ‘It is true if you put the time and effort In you will get the results’ Shortly after max was on the phone me laughing as almost every one called him a liar and asked for photos.

I sent a photo to everyone I had earlier asked to come with me to split fuel costs but all had reasons why they could not come. The replies were funny to say the least.

We filleted the fish and Max gave me most of it, True to his word. I even took all the bones for fish stock and the tail to salt and dry out for a collection. I returned home with a full Esky and with the biggest smile on my face as I remember my dad’s words as I left that morning ‘you’re going all that way for a Kingfish’ I was glad that I did.

The best thing about the day was that I watched a mate that started spearfishing around the same time as me, went through everything that I did as a newbie spearo shoot a fish of a lifetime and I couldn’t think of any one that deserves it more for his work with new spearo’s and work with the USFA also sharing information with mates from out of town when they come to dive his local. A great fish for a great bloke as many have said, Well deserved.