Mulloway average from  6 to 20kgs with occasional specimens reaching 35kgs or more. They are silvery or bronze in appearance with a row of opalescent spots running along the lateral line which light up when viewed from certain angles.

They live in water ranging from a few meters deep to very deep. They usually congregate in deepwater in wrecks, offshore pipelines or drop-offs with large caves and shelves of rock. They prey on a variety of squid and fish such as tailor, mullet and the like. Caves are also preferred terrain in shallow areas, though sometimes a shoal will ‘hole’ up in a sandy gully especially where there is a swell causing foam on the surface and churning below. Once you have located a cave with Mulloway in residence you can be pretty sure that others of the species will be found in the future. Mulloway found in caves and overhangs are relatively easy to shoot but as they normally choose a shelter with more than one entrance things can get very complicated if the shot is not in the spine or head.

When encountered in open water the fish will often be swimming slowly in what appears to be a defensive circle. Big Mulloway have been known to form a three meter circle, and we have received reports of shoals number hundreds of fish in deeper water where the base of the circle has measure 20 meters in diameter, stacked to form a pyramid of fish 25 meters in height. The few fish forming the apex turning very slowly, while those forming the base turning much faster so that the whole shoal is revolving as a single entity.

The best approach to a small circling shoal is from above, if the water is at least 10 meters in depth, so that there is a good chance that a quiet dive from the surface will not be detected by the wall of eyes (and sensitive lateral lines) that face in every direction.

In water shallower than this, get down to the bottom and approach using as much cover as possible or in open water. Make the approach not directly towards the shoal but to a point to either side that will bring you within speargun range. S you get closer the circling fish will begin to speed  up and finally explode in every direction (except yours) so don’t hold off for too long. 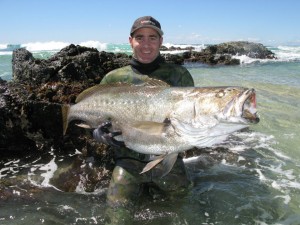 Tim McDonald with a great Jewfish from a shore dive

The target area should be, as with most other fish, where the lateral line begins at the top of the main gill opening, though anywhere along this line may be considered a good shot.

A little too high is preferable to a little too low, for Mulloway have a large stomach area and although not noted as a very strong fighter, the initial run of a heavy Mulloway is very often enough to tear the soft flesh in the gut area and the resultant loss of the fish.

These fish are migratory, travelling northward towards southern Queensland in winter and southwards to the cooler waters of Victoria or southern New South Wales. A similar migratory pattern happens on the west coast.