Matthew Parker is another runner up from the sponsored spearfisher competition and we're excited to bring you his first writeup as an Adreno Corespondent.

With my girl 8 and a 1/2 months pregnant, saving up enough browny points to go diving was hard so picking out a good weekend to spend these points on was difficult. Checking over the tides and deciding that Sunday the 17th would be the best day to try. In the build up to the weekend and a low heading down from the north west the weather report had us licking our lips at predictions of 4 knots in the morning and 6 knots in the afternoon. With low tide at 7.30 and having an hour drive to the boat ramp (which is a river mouth with a cutout inbetween sandfly infested mangroves) 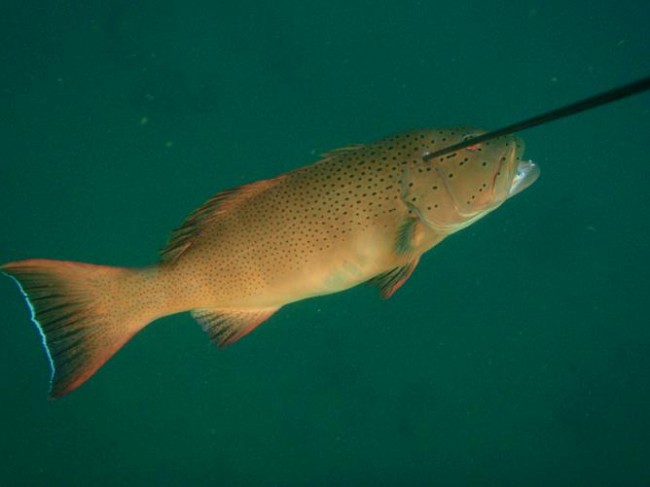 We left town at around 4am without a breath of wind. By time we arrived at the ramp the sun was just peaking the horizon and the water was a milkpond, as we reached the mouth of the river and headed into the ocean the wind picked up to around 10-15 knots and it started raining and there were plenty of storms around us. it seems to me the weather report may have been out by a day!!

We persisted and went to a ledge we had plotted, as we arrived there were plenty of bait and birds working the area. we kitted up and layed plenty of burley before entering the water. I was using a 1400 Aimrite super venom that i had just recently fitted a barracuda paxman reel and keen to test it out. Dropping anchor up current on the ledge where it was around 9m you could only just make out the bottom. Upon entering the water we were greeted with cold green water and only around 8m vis which is not what we expected. Less than 2 mins after entering the water i was sitting mid water checking out some bait when a shadow appeared from behind, i kicked towards and the distinct shape of a tuna appeared i took the shot and it screamed off peeling 20m of line from the reel before i knew it. putting the gun behind me and fighting the fish for around 10 mins i finally got site of the fish and realised how big it was after braining the fish and putting it in the boat, we took some pics and then blood and gilled and put in the esky for sushi. The tuna was a northern bluefin tuna and 123cm long, it was not weighed but i later found out from barry paxman that this tuna definitely would have been close to a record i now have a chart of records and a decent scale in the boat just in case. 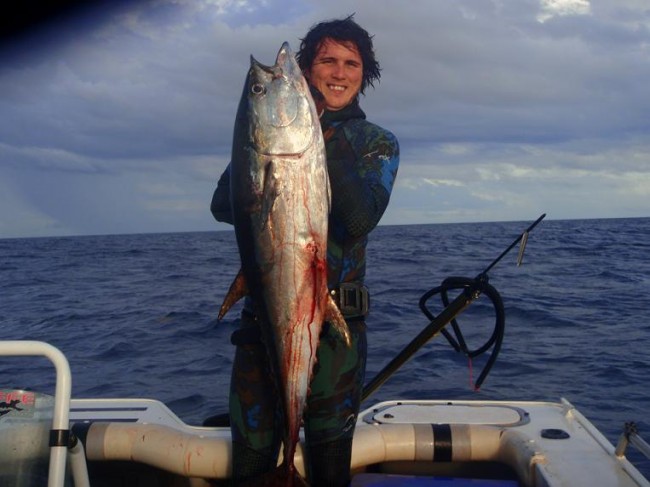 I then grabbed the camera and started filming in case there were anymore tuna around but none were sighted, the spot didn't hold many other fish so we moved a bit further out to another ledge. The weather still hadn't got and better if not it was probably worse, so we decided this spot would be the end of our day. The water was still dirty but this ledge was covered in trout, Cameron landed the first one of 71cm with an awesome stone shot. After cam put the trout in the boat he then grabbed the camera and started filming i landed 2 trout for the camera we then swapped and cam landed a nice blackspot with a good fight for the camera. We grabbed a couple of crays then headed back to the boat, with the weather still not holding of we decided to call it a day and head back. Diving home both disappointed that the weather wasn't as good as the report but definitely happy with the final days catch.