It's not like we were diving deep, 10-15m, and occasionally a couple of metres more. That was a typical depth for all of us though, and one that we're used to and comfortable with. Many people would say "I don't need a dive buddy, I'm not diving past 15m". Luckily, out of pure habit of diving as a team, we were together in a group of three yesterday watching each others every move. If we weren't, an amazing day on the water could have easily turned to tragedy. 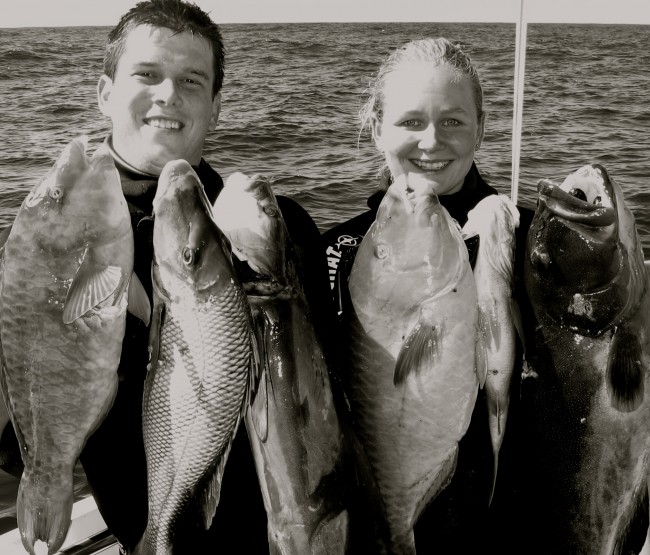 It was a great day on the water. But if things had gone more wrong, this would have been the last photo we had together.

It was Woody's turn to dive. I watched as he laid on the bottom at 17m, threw up some sand and extended his gun. I couldn't see the fish that he was aiming at until he pulled the trigger, and a nice tusky began to pull at his gun. I knew then that something wasn't quite right, because Woody let go of his gun when usually he would just drag a fish of that size to the surface. Maybe it was a bad shot, I thought and looked at the fish to see that it was in fact a pretty low one.

But still, Woody stayed on the bottom for those extra couple of seconds where he would usually be kicking up to the surface. The swell then rolled him over, and I saw that his eyes were shut. I was immediately confused. How could he have blacked out? It wasn't a particularly long dive, but maybe he hasn't had enough surface time, although I'm sure he has because we've been diving in turns!

These are the thoughts that ran through my head in the split second that it took me to drop my gun, take a single breath, and head down to collect my passed out dive buddy of two years from 17.3m.

I was at 12m when Woody seemed to come to. He looked a bit dazed as he put his snorkel back in his mouth and checked his watch. I knew he still wasn't with it, as putting your snorkel back in isn't something spearos would usually do if they were thinking straight. I swam back to the surface alongside him. As he got a breath of air I held him up and saw the blood on his lip as he explained that his gun misfired, recoiling back into his face. "Did I get the tusky? Where's my gun?" were the second things he said before he powered off to save his fish from a small reef shark. Typical!

We were actually diving in a group of three, which made the whole situation a lot more comfortable. I knew as I headed down that if something went wrong pulling Woody up, Tim Higgins would be there for backup. I always feel more comfortable with three in the water as opposed to two.

What actually happened to Woody is that he pulled the trigger on the tusky, a couple of times, but his gun didn't fire. So he started to bring the gun back towards his face to check it, and that's when it decided to go off. All he remembers was a flash of white, and then waking up wondering what he was doing, and putting his snorkel back in to try to breathe.

Blackout is the primary reason that we are told to dive in buddies. But this is why so many people ignore the buddy rule when diving in that 15m depth - because blackout is 'supposed' to be unlikely there. When I started spearfishing though, it was with a group of guys from Grafton who were good friends with Jacob Lollback. Jake sadly passed away from a blackout in just 15m of water, in the same general area as we were diving yesterday in fact.

It's an easy assumption to make. The water is clear, the ocean is calm, the fish are plentiful, and the depth is 'safe'. Typically, in that scenario, spearos will all swim off in their separate directions. While I see it happen all the time, I make a point of being that annoying girl who always sticks by someones side and insists on diving as a pair, because I got into spearfishing with guys who had seen what could happen when things go wrong at the least likely of times.

Yesterday, two and a half years of being that annoying safety-conscious diver paid off ten-fold as I was there to help my dive buddy when things could have gone very wrong. He was lucky that he wasn't out for too long, but if it was worse and I wasn't there, I know I would have been looking for a body 20 minutes later when we all finally finished the drift and realised that Woody wasn't with his float... 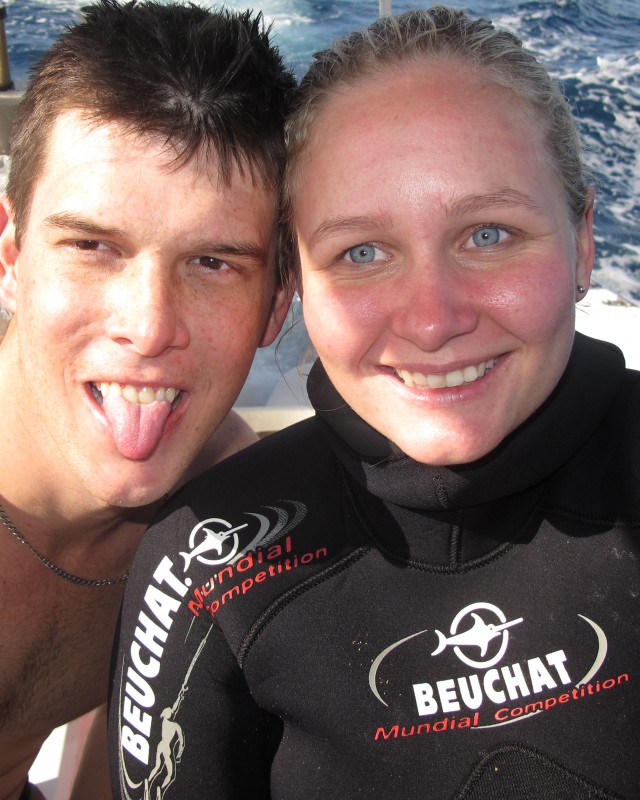 Happy to be heading home safe with some nice fish, and many lessons learned. His busted lip is covered by his tongue!

Some important lessons from yesterday:

1. Blackout isn't the only reason to dive in a group, there are numerous things that can go wrong.

3. Know your dive buddies, their habits and their techniques. Dive down to them as soon as something seems amiss - whether they are kicking differently, holding their gun wrong, letting out bubbles and so on (a competition Freediving judge reminded me of this just a couple of weeks ago). I didn't see Woody get hit in the face, but having dived with him for two years I knew that it wasn't right for him to let his gun go and stay on the bottom.

4. Don't make excuses. No matter how good the conditions are, or how easy the diving, or how much your dive buddy annoys you when they swim in a different direction to what you want to go, stick with them. No matter what. Because the one time that you get relaxed and don't could be the time that you lose them. I have a dive buddy who has blacked out in 8m of water while diving for Crayfish, because he wasn't adhering to proper surface times (3 times the amount of time that you spend on the bottom should be spent on the surface). Luckily, he had a dive buddy with him and was revived.

I had this banner made up last week with a picture of Travis Hogan's that I absolutely love. The slogan that I added to it has never felt as true as it does today, after coming home with everyone safe, when I could have been having to explain to Woody's family that I didn't see what happened to him because I wasn't watching. I hope that someone learns as much from this experience as I have, and that one day you are able to be there for your dive buddy when they need you most.