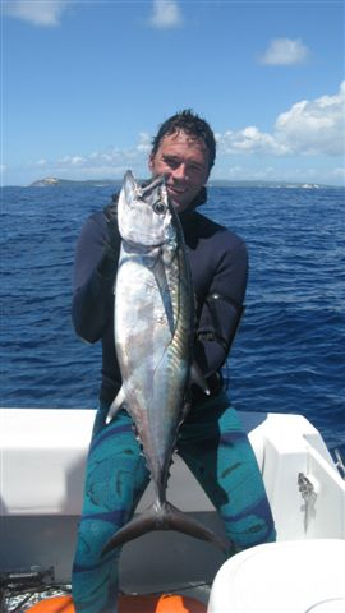 Last weekend we attempted a trip to Moreton where we found nothing but dirty water. Undiscouraged, we decided to press on heading to Barwin Banks. After busting off the seat in Guy Wood's boat coming down a big wave an hour and a half into the journey, we finished the three hour trip with the seat tied to the esky! The long boat ride paid off though, with some nice job fish, mangrove jack and spanish ending up on ice.

Thankfully, the 15 knot NE dropped to 10 and the trip back was a shorter 2 hours. With the following week being some promising South Easterlies, we knew we would have a better shot at some clear water at the top of Moreton. More than keen to nab some summer Spanish before they disappear for the season, Guy Wood, Ben Teufel, Brandon (out from NZ for wrk) and myself headed out from Redcliffe on Saturday.

We started the day with a few drifts over flinders, seeing a few other Spearfishing boats including Casey and Rod. Unfortunately it was pretty quiet and with the Spanish eluding us we moved a bit further north. We stopped off on our way to hutchies where, after burlying the guts of a Parrot, I didn't see much for a good half hour and had just jumped back in the boat when Benny yelled out, "DOGTOOTH!".

"Is he saying jobfish", I thought to myself. "DOGGY!", he yelled out again, and still I thought he was just really excited about a jobby. But sure enough, Guy Wood surfaced with an 8.5kg dog tooth tuna - no doubt fish of the year so far for a Brisbane diver!

Next stop was a deep pinnacle where I managed to shoot a nice red emperor at 26m. We moved onto hutchies, but with not much around continued on to Robert Shoal where Brandon picked up a small Spanish and Guy and I picked up a jack each, mine weighing a nice 3.5kg! After our previous weekend of dirty water, this was definitely a great day out for all.