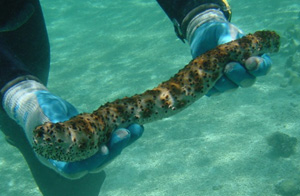 After cyclone Yasi hit nearly a year ago, the numbers of sea cucumbers in the area had decreased significantly. This isn’t something many people other than marine biologists would notice, unless you are in the ‘sea cucumber business’. Sea cucumbers are considered a delicacy in China and they fetch over $130/kg once dried (as ‘trepong’). The marine species are such a common food over there that you can buy them in a supermarket.

Some sea cucumbers also are considered to have a healing effect and even help to prevent malaria.

Not only the Japanese and Chinese value sea cucumbers as a medicine or food. Other cultures, like the French, also think sea cucumbers (bêche-de-mer) are a delicacy. 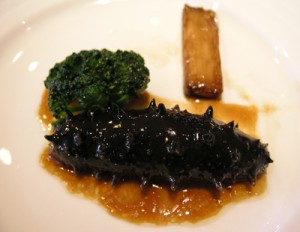 Food industry Sea cucumbers (one of the echinoderm species) are normally 10- 30cm long, but can be as little as 3mm long, or as large as 1m long. They feed on decaying organic matter and plankton. They sort of breathe through their anus, by drawing water in and then expelling it, drawing oxygen.

Sea cucumber harvesting has been part of the Australian fishery industry in the Coral sea since it first established itself over a century ago. In the early days there were as many as 400 divers operating from Cooktown. The practice has increased in recent years due to more demand for sea cucumber skins and muscles from China, with Alaska being the main area of harvesting. Wild sea cucumbers caught by divers are said to have a higher nutritional value than sea cucumbers farmed in Chinese ponds. In Australia sea cucumbers are harvested in Far North Queensland, Torres Straits and Western Australia The main target species here are White Teat Fish, Black Fish & Sand Fish, caught by divers in up to 40m deep waters.

Good outlook Marty Cunningham is a fisherman who collects sea cucumbers for the Asian market. To ABC news he said this week that after cyclone Yasi, which destroyed many reefs and corals and changed the balance of the marine life, they didn’t go out diving for sea cucumbers. But the outlook is good again now: "We had our first trip out there this year in late December to a reef just off Hinchinbrook Island," Cunningham said. "You can definitely notice the impact there but it hasn't been affected as badly as I initially thought it may have been. We worked right up to Christmas this year to accommodate the Chinese New Year coming early." (which falls on January 23rd).

Rising sea cucumber numbers between Cairns and Townsville may be an early sign of the Great Barrier Reef's recovery post-cyclone Yasi. 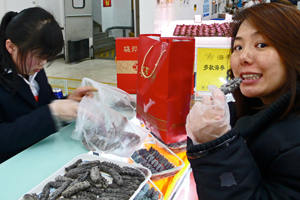 YOUR COMMENTS Have you ever eaten sea cucumber and would you like to try it? Would you catch them and sell them to the Asian market? Have you noticed changing numbers of sea cucumbers in Australia?