After a long, windy and rainy few months the weather gods were finally starting to come onto our side and this weekend was no different. With a good weather report for Saturday we packed the boat and made an early start leaving home at 4:30. We headed 80km south to the turnoff then 30 down a bush track to the ramp and launched the boat while it was still dark. As we made it out of the mouth there was a slight breeze making some small chop, its around an hour and a half boat ride with lots of anticipation as we haven't been able to travel out to this area since June last year. On our last trip we encountered some massive coral trout and Spanish mackerel. On the way out we stopped at a spot that usually holds some nice blackspot tuskfish. After kitting up and jumping in there were some small ones around but nothing decent. We jumped back in the boat and finished our trip to our main spot, where we anchored up in around 10 to 12m. 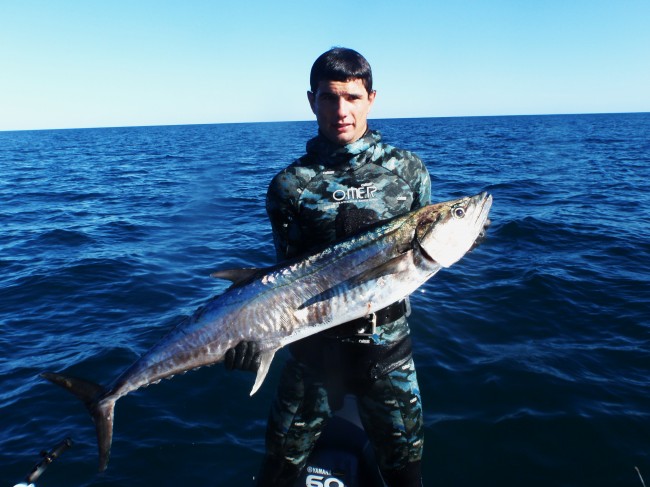 We threw in some burley and put 2 flashers out the back and jumped in. The spot was exactly how we remembered with schools of fusileers and yellowtail darting around everywhere. Cam made the first dive and his gun fired but he returned with nothing on his spear, but he said there were plenty of blackspot down there. I dove down to see around 6 large blackspot and 2 massive species. I followed one of the larger ones stalking him for a few metres till he finally gave me a shot hitting him perfectly through one eye and out the other, with not much of a fight he was in the esky.

Cam went back down this time he returned with a nice bar cheek trout with a shot through the gills. I took another few dives then found a large bar cheek towards the end of the lump, he then swam under a ledge. I unloaded one rubber then swam down as I reached the front of the ledge where a big mangrove jack swam out. I stalked him for about 10 metres until he finally gave me a shot but with only one rubber loaded the shot was a bit ambitious and the jack darted back into the reef never to be seen again. I reloaded and swam down to find the bar cheek after a quick line up I took a shot and stoned it. 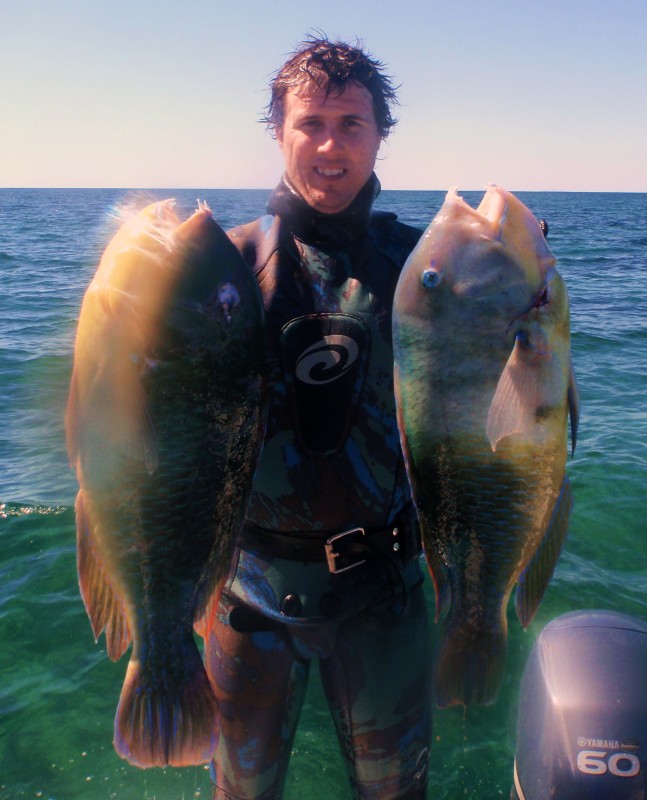 The spot then quietened down so we decided to make a move. The best way to find ground is towing so I towed Cameron and around 250m NE following the same contour we came onto another lump that looked promising.  Once it burleyed the spot came alive and there were baitfish everywhere with schools of small flag and fingermark taking burley. Amongst all of the commotion there were plenty of trout feeding and out the back I watched cam dive down and he stoned a big trout and we then landed another 2 trout and a big blackspot. We put a couple of flashes out and both grabbed our Riffes in search of some mackerel.

In no time at all there were 2 decent mackerel that came in for a look, so I dove down to mid water and hung around the flasher while the smaller of the 2 mackerel came in I lined up and pulled the trigger only to find the safety still on and they both spooked. We kept diving grabbing a handful of crays, another big Spanish came from behind us and gave Cam a perfect broadside shot which he didn’t miss and with a small fight this fish was in the bag. We ended the day with a good esky full of tasty fish and crayfish, we then started our 2 n half hour trip back to my place for a few beers and some garlic crayfish on the barby.