It's a debate which has raged for decades and been used by extreme green groups to attack fishing as cruelty masquerading as sport, but new international research claims fish don't feel pain when struggling on the end of a line.

Fish do not have the brain structure, or enough specific nerve endings, to experience pain, the scientists concluded.

When a fish is hooked and struggles against the line, it is an unconscious reaction to being reeled in rather than an example of a creature writhing in agony, according to Jim Rose, professor of zoology and physiology at the University of Wisconsin, who led the project.

Their review of previous experiments, reported in the scientific journal Fish and Fisheries,included tests were researchers inserted needles, and also injected bee venom and acid, into the jaws of rainbow trout.

"In spite of large injections of acid or bee venom, that would cause severe pain to a human, the trout showed remarkably little effect,'' Professor Rose said.

He said fish also resumed normal activity within minutes of surgical procedures, or after being caught and released back into the water.

Prof Rose said fish did not possess the highly developed neocortex needed to feel pain, so don't experience it in any meaningful way like humans.

The did have nerve cell endings called nociceptors which initiate the sensation of pain, but only in extremely small numbers.

"It is highly improbable that fish can experience pain,'' Prof Rose said.

The scientists said despite their findings fish still deserved to be treated humanely.

Leading anti-fishing group PETA, which has produced ads warning children that if their father fishes he might also shoot the family dog, has rejected the new research. 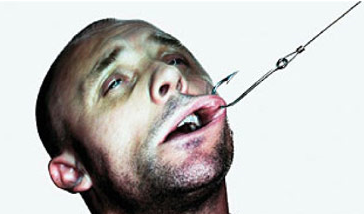