Some people like to chase these fish others not so much. Got to give it to the fish though, they are really nice in flavor to eat. The fish is relatively easy to hunt and shoot plus one of the easiest to clean and prepare for a meal. Also another thing that the flat head has going for it is the fact that the bigger they are the less tasty they are to eat. I find that the fish in the 40-45cm range are best to eat. 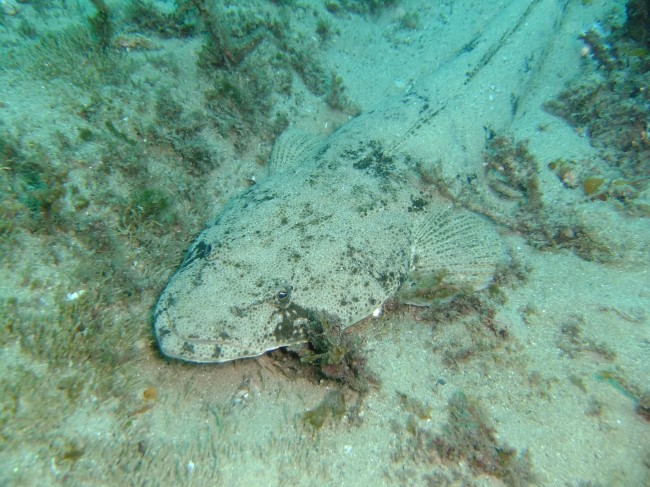 The NSW bag and size limit for the dusky flathead is 36cm with a bag limit of 10 with only one fish beigin allowed over 70cm, the limit for the blue spotted and tiger flat head is 33cm and a bag limit of 20. When hunting flat head a small speargun is more that enough to capture these fish say a 1m rail gun with a single 20mm rubber.

If you are chasing them around headlands you will need to look over the sand where it meets the rocks of the headland. What you will be looking for is the outline of the fish in the sand plus two black with yellow eyes looking straight back at you. I have found that by not looking directly at the fish in hiding plus also making slow non aggressive movements towards the fish you will have a better chance at closing the gap to allow for a shot. When you get close enough for a shot aim behind and behind the eyes, this will give you the best chance of landing the fish, plus kill it quickly and not damage any of the meat.

A point to remember is that Flathead all have a spine on their back that when strikes you will cause lots of pain. If this happens you can rub the belly of the fish on the affected area. ( slime on the belly of the fish stops the pain form the sting, not sure why but it works) Also keep in mind that the Bigger fish are the breeders, also they do not taste very good in comparison to the smaller fish.