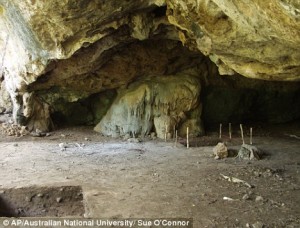 People were going deep-sea fishing for large delicacies such as tuna as long as 42,000 years ago, Australian researchers have discovered. The world's oldest fish hook, dated at between 16,000 and 23,000 years old, has also been unearthed from a cave site in East Timor.

The ancient, broken hook was crafted from shell and is "the earliest definitive evidence of fishhook manufacture in the world", researchers concluded in their study, which was published in the Science journal.

Boat journey She said the first people who arrived in Australia at least 50,000 years ago must have had boats because they had to cross hundreds of kilometres of deep ocean channels to get here from south-east Asia. Being able to catch deep-sea fish would have helped them on their journey, via the many stepping-stone islands, such as Lombok, which did not have many animals.

Species About 50 per cent of the fish bones in the oldest area of occupation in Jerimalai, dated at between 38,000 and 42,000 years old, came from ocean fish, such as tuna and trevally. The rest were shallow water species, such as parrot fish. The people also ate small amounts of marine turtles, rats, bats, birds and snakes. 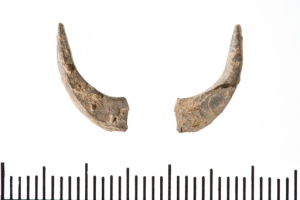 Did they spearfish? It is not known how they caught ocean fish, because no fishing gear was found in this section of the dig. “It seems certain that these people were using quite sophisticated technology and watercraft to fish offshore", says Sue O'Connor, an archaeologist at the Australian National University.

They found more than 38,000 bones from almost 2900 individual fish in Jerimalai Cave. “What the site in East Timor has shown us is that early modern humans in island south-east Asia had amazingly advanced maritime skills," she said. "They were expert at catching the types of fish that would be challenging even today."