One of Adreno's Sponsored Spearfisher runners up Darren Stack has written this exciting, indepth blog about his spearfishing trip over Easter...enjoy!

It was the Thursday afternoon leading into the Easter weekend, the minutes felt like hours and the hours just didn't seem to pass. The Weather had already ruined our plans to head up to the Keppel’s and left us with only the Friday to squeeze in some local diving, obviously we were keen to make the most of whatever we could!

As the first ray of light snuck through the window I was awake, pumped and ready to dive. Arriving at the boat ramp I was glad to see the boys all set and ready to go. Unfortunately, being good Friday, every boat on the Sunshine Coast was in on the action. We pushed past the muddy inshore waters and everyone was pleased to find a beautiful 5 knot breeze, nonexistent swell and 12-15m viz, which seems rare these days. We pulled up on one of our normal spots and it was ON! It must have been just seconds after the engine was cut and Karl was already 10 meters down... BAM WAHOO! Just kidding, there was none of that. The fish seemed very skittish and the amount of boat traffic was almost scary, luckily we had a great boaty for the day thanks to Cliffs Dad, Stephen.

After a few dives on a small ledge I was almost ready to move on but decided on one last dive to suss out a school Sawtail Surgeons which came swimming by. As I dropped down to the school I spotted a beautiful parrot fish sitting underneath the school and just out of range. The hunt was on, I knew he had not yet spotted me and made every effort to keep it that way. I slowly drifted along with the school, paying no attention to the parrot until I was a perfect long shot away. I didn't know Surgo's would make for such great camouflage but it worked out perfectly. I dropped down further almost on the bottom, parallel to my target and landed a shot dead centre of the body. I knew the shot was not ideal for such a soft fleshed fish and although I planned to play him softly, I knew if he made it to the reef it was game over. He was off, darting straight for the reef, I was hardly rising to the surface while trying to keep enough pressure on the line to hold him off the reef. I felt the line go slack and rocketed to the surface with the disappointing feeling that the spear might have ripped through. After a few breaths & pulling the line into visibility I was stoked to see... MY FIRST PARROT! 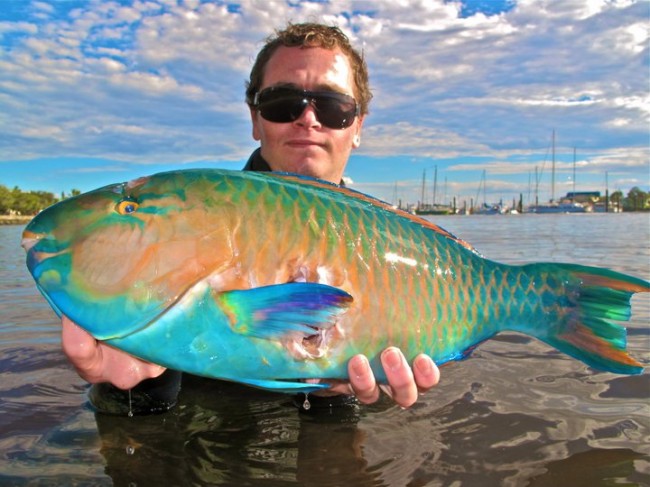 After a little longer, nobody was having much luck and we decided to move out wider to the blinker. Boats were everywhere and we didn't expect to find much on such a heavily fished spot today. We pulled up and Cliff was straight onto it, we were all just getting in the water when Cliff came up screaming "KINGYS! BIG KINGYS, I got one!". He was fighting furiously to keep from getting wrapped up on the blinker, that didn't work but somehow he managed to untangle and pull it off the chain before Rogan landed the second shot. I'll never forget the smile on his face as he pulled that beast out of the water, stretched ear to ear and for good reason. Top fish. Perfect shot. Well played. Good luck fitting it in the esky though. NICE WORK CLIFF, A NEW PB KINGY! 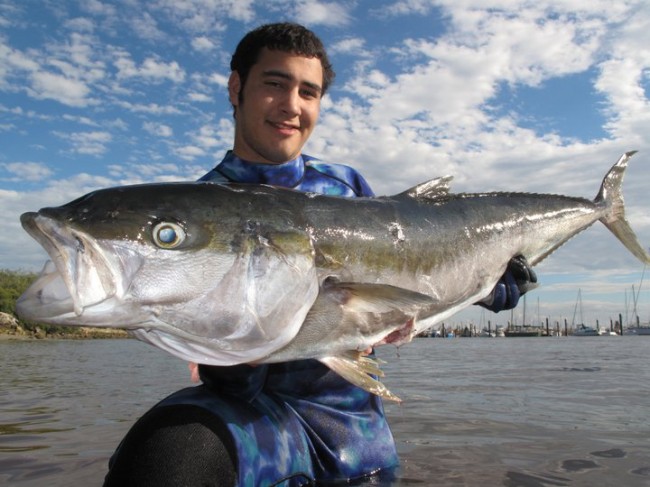 The day was getting on and a few of the guys had Family commitments in a few hours so we decided to find some easy, shallow ground to finish the day. After months of hard, dirty hunting it felt great to finally see the bottom again. The ground wasn't the most interesting and the current was rushing but the fish were definitely about. My first dive down I found myself in a game of cat & mouse with a Purple Tusky. He was on to me and for some reason wanted to avoid my spear. After a slow chase I thought I had lost him, I watched as he ducked in behind a bommy. I lost sight and knew the only chance I had was to catch him out if he popped out the other side of the bommy, I thought he might have kept swimming straight but it was the only shot I had. I was hiding behind a nearby rock and taking aim at what seemed to be nothing, time was ticking away and soon it was time to leave. Just as I was beginning the short ascend to sweet air I seen my beautiful Purple Tusky pop it's beautiful head from around the bommy. A quick flinch of the finger and i had him pinned under a nearby ledge fighting to get free. As tempting as it was to salvage my catch on that dive I reminded myself that no fish are worth dying for and quickly returned to the surface. A quick breathe up later and I was back on the bottom fighting to free my spear which was stuck deep in coral. After 2-3 dives loosening the spear, it finally popped free and was quickly added to the esky. Such a beautiful fish... MY FIRST PURPLE TUSKY!

Shortly after, I heard Rogan yell from a little up current "Lot's of Grassy's over here, give em a shot!". I swam over and he told me he had been hunting these Grassy's hard for ages and in true Grassy style they were staying just out of range. I wasn't expecting much but I dropped down with intentions of laying on the bottom, grassy hunter style. I paid no attention on the descend and to my surprise when I looked up I was literally face to face with a small Grassy Sweetlip. Much too close to shoot, there was under 50cm between me and my pray. I had never shot a Grassy but knew that they were very skittish, I knew that I could make no sudden movements, soo... I just lay there, in a stare off with a Grassy, neither of us game to make the first move. After what seemed like forever the Grassy just gave up, it slowly swam to point blank range in front of my spear, turned broadside and stopped. Before pulling the trigger I had a little chuckle to myself knowing that this is the complete invert of a standard Grassy hunt and all of a sudden, there she was, lying on ice in the esky. MY FIRST GRASSY SWEETLIP! 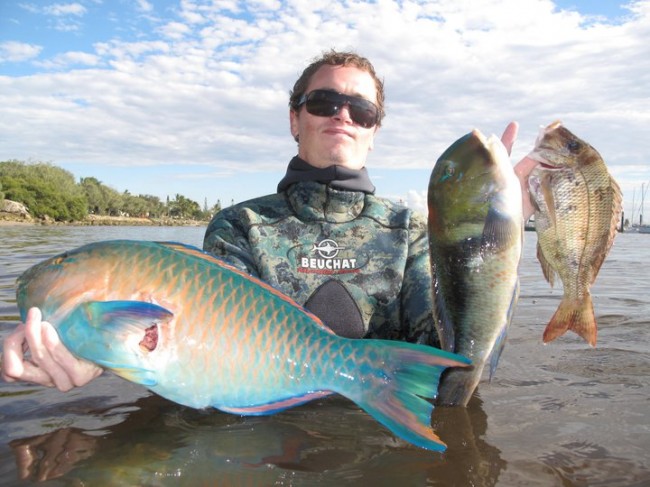 Karl, who had only recently moved over from New Zealand and was unfamiliar with our vast range of species, managed to shoot a mix bag of reefies; mostly Graphic Tuskfish, a purple tusk fish and a few Surgeon fish (nothing wrong with Surgo's they chew up great!). Unfortunately Rogan had had very little luck that day, which is very unusual for him, so he decided to nab a quick Surgo for the pan before heading in for a photo shoot and the all important MACCAS!

Like all good things in life, a little is never enough and we quickly decided to do a camping trip the following day to shore dive Kingscliff. Stay tuned...