Not by coincidence part of the Adreno BIG 5 competition, the wahoo (Acanthocybium solandri) is a prize game fish which forms a real challenge for spearos.

- Appearance: elongated body covered with tiny scales, razor sharp teeth in a large sharpish looking mouth - Colour: iridescent blue on the back, silvery on the sides, with a pattern of irregular vertical blue bars - Size: up to 2.5m. in length, and weighing up to 83kg. - Speed: wahoo can swim up to a whopping 80km/h! One of the fastest fish in the ocean... 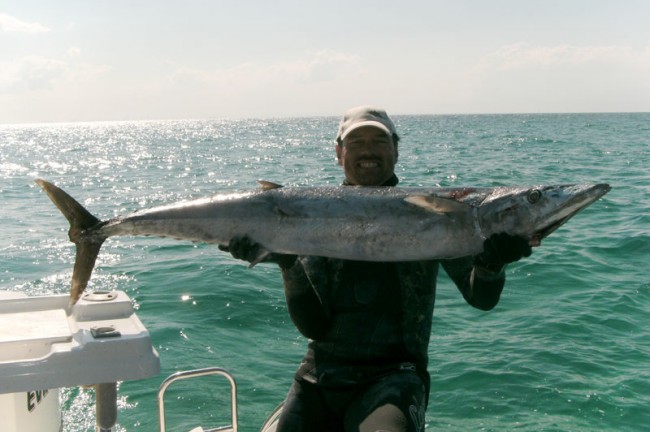 Dr Whoo with his latest wahoo

Wahoo will move very fast once it knows it is being shot and takes off with such a speed, that you have to have your wits about you when spearing one. To help you all out a bit, we went to pick the brain of Adreno’s own Dr. Whoo, known to regularly land big wahoo (hence the nickname). Understandably, he won’t share all his secrets with the world, but he was kind enough to help you on your way with these particulars about wahoo:

Wahoo behaviour -inquisitive: known to come and check you out -solitary, but living in larger groups when conditions are right

Where to find wahoo - worldwide, in tropical and subtropical seas - in offshore waters - in temperate to warm waters above 23 degrees Celsius: for this reason they are abundant in Queensland and all the way down to Coffs harbour in New South Wales

When to look for wahoo - in Queensland: early spring to mid summer / in northern New South Wales: at the peak of summer

How to target wahoo - use a speargun that is at least 1.3m long, as anything under may not do the job - use flashers to attract them, they are curious fish and will come and check it out - use surface burley And here’s some final piece of advice that is so valuable that we almost had to squeeze it out of Dr. Whoo, for him to make it public: always let the wahoo approach you, not the other way around!

Where to aim - Some people prefer targeting the tail end of the wahoo, at about 2/3 of the fish’s body, where it is softer, but Dr. Whoo prefers the traditional kill shot behind the gills at an angle, slightly from the back, so when the wahoo does speed off, the motion doesn’t break all the flesh and you’re more likely to hold it

WARNING Once speared, wahoo run extremely fast. Be careful not to get stuck in your tow line when this happens, and be prepared to let go . As Dr. Whoo put it: “it is one thing to lose your speargun while trying to take out a big fish, but losing your life over it just ain’t worth it!”

Was this information useful to you? Have you got some other advice about landing a wahoo? Leave your comments below!