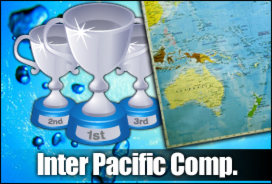 Kahlee Andrews is a talented young spearfisher who is currently over in New Zealand representing Australia at the Interpacific Spearfishing Championships.  Over the next few days we will be posting Kahlee's firsthand reports and photos from her exciting time over in New Zealand. Kahlee is also sponsored by Adreno so make sure you get those entries in for the current competition on Facebook. Without further ado, Day 1...

What an amazing few days! I’m here in New Zealand, on my first overseas trip, representing Australia and diving alongside some of the top divers in the pacific region. We are staying in a three story house with the most amazing 180⁰ view of Flaxmill Bay, and of course, having an amazing time! The Interpacific Spearfishing Championships is the highest level of competition for a diver in the pacific region. It attracts teams of four men and two women from Tahiti, New Zealand, Hawaii, New Caledonia and Australia. The Australian team selection is made based on scores from the national championships. This year the Australian team consists of:

Kahlee Andrews – me! – winner of Ladies division at nationals

Our first day of diving was accompanied by amazing conditions – crystal clear glassy water, sunshine and the water wasn’t cold at all with my Beuchat spearfishing wetsuit! Guy, Alli, Adam and I headed to a bay about 20 minutes away to get our weighting right and collect some oysters for dinner. Alli pointed out what the Oysters looked like, hidden in the sand, and 70 oysters later we were jetting off to our next dive spot – The Bookcase.

Adam and Guy picked up a few john dory for dinner. Next we dived   a spot called the Graveyard, where I was given a tutorial on burlying up with sea urchins, and managed to get my first pigfish and butterfish. After a day of driving from Auckland and then diving for half the day we ate an amazing meal of pasta, bolognaise sauce and scallops with a side of john dory, and headed to bed.

Check back tomorrow for another roundup and to hear about how Kahlee and the team are preparing for the championships.