Continuing on from yesterday we have the lead up to the Interpacific Spearfishing Championships as told by one of Adreno's sponsored spearfishers Kahlee Andrews. If you missed Day 1 yesterday then catchup here. 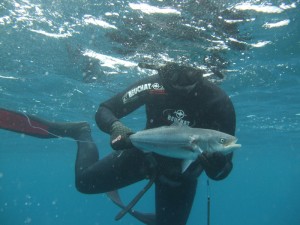 Day 2 We awoke to beautiful views, but the weather wasn’t quite so good. Guy and I wore our masks during the rainy hour and a half boat ride to a group of islands called the Alderman’s.  After dropping Guy and Adam off at a rocky pinnacle on arrival, Alli and I anchored at a nearby island and began scouting. There were a few nice snapper around but they were a bit shy.As I was swimming I ran into a school of decent sized fish, and with Alli no where to be seen I decided to shoot one so that he could ID it for me.

I dove down, lined up on a nice one and pulled the trigger… safety was on… damn. I switched it off and chose my next target, placing a nice shot behind its eyes. Alli found me and told me it was a Kahwai – what we would call salmon.They would be on the species list for the comp so it was good that I managed to get one. The other pair picked us up and we headed to the next island. 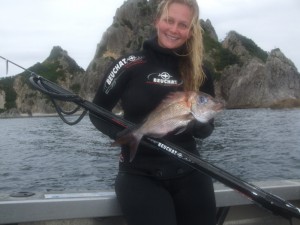 Here, Alli gave me a tutorial on burlying with fish, using the salmon I’d gotten. As he burlied I dove down, hiding behind a ledge of kelp with my gun aimed amongst the burly. Sure enough, a snapper wandered in and I lined up, pulled the trigger…. Bloody safety again!! Thankfully the snapper was preoccupied with its food and didn’t notice my mucking about so that I was able to place my shot – straight through its eyeballs! My new Beuchat Marlin Carbon Fibre was like a honing missile compared to my previous gun and I was loving it! 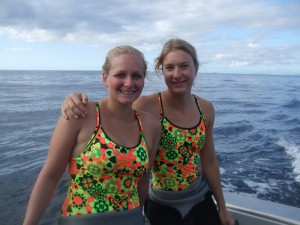 My partner, Chelsea, arrived last night and we were looking forward to getting some practice together. We headed to the Graveyard, the likely spot for the women’s comp. I showed Chelsea the different species and taught her what I had learnt from Alli about snapper snooping and burlying. We got a good feel for the area and saw plenty of kingies. Unfortunately, they’re not the massive ones I had imagined and I don’t think any were legal as they have to be 75cm over here. The visibility has been absolutely stunning though!

After being warned by everyone back home that the visibility would be terrible, I can now say that we have better vis over here than I’ve seen in SE Qld since November! We headed back in with a stop over to get some scallops. Between the six of us we had 120 in 20minutes! The other pair of divers, Paul and Ryan, arrived late afternoon and we settled in for a dinner of snapper and scallops before getting an early night.

We will continue the Remember like Kahlee you too could be sponsored by Adreno so if you haven't already download the PDF and work on submitting your entry. Best of all we've just extended the deadline to give everyone some extra time to piece together their winning submission so you have until April 25th now to get those entries in.