My apologies for not keeping you updated over the past 2 days, internet access is very limited here in Kaua'i, Hawaii! I am here representing Australia in the 2012 Interpacific Spearfishing Championships. 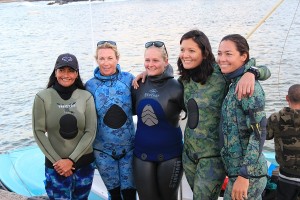 We arrived in Kaua'i on the weekend to find that they have had their annual rain fall amount in the past 3 weeks. A huge storm cell went through which made the water extremely dirty (1ft in places) with 45kn winds to top it off.

As such, there was no opportunity for scouting before the competition.

The first day of competition was the womens competition day and the worst of the days so far. We came here expecting 30m visiblity and warm waters. Unfortunately, that wasn't the case. Still, as competition divers, we must be ready for whatever conditions come our way. 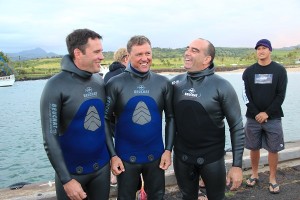 The clearest water we found was a hazy 5 meters, with 3 meters being the average, but it was down to 1ft in places. Sometimes the dirty water was on the surface, sometimes on the bottom. We fished the 8 meter line, the 10 meter line, swam out to sand at 15 meters, we belly scraped the lagoons down to 1 meter, we looked in caves, under rocks, amongst the white water of the waves, flogged ourselves back and forward in the swell though squeezes and places a human body should not fit!

The Hawaiin girls won the day with just 3 fish. But not to worry, it was a great learning experience and I know that I am a better diver for having competed.

Today, the guys had the first day of their competition. They were faced with better visibility - up to 15m in places. Despite diving hard, some teams returned with less than 10 fish between the 4 divers over 6 hours! However, some teams did fantastically. Tahiti (a professional spearfishing team who dive 6 days a week, are paid well for it, and fully sponsored to compete in these competitions) got 40 fish! The results were as follows: 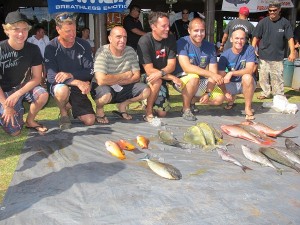 I will be able to report back in about 10 hours with the second days results, and the winner of the competition, as well as more photos.

Thank you to Adreno for being a major sponsor for the Australian team. The guys are all VERY impressed with their Beuchat Reversible wetsuits - they honestly have not stopped raving about them. They especially love how easy the wetsuits are to get on (being reversibles with the neoprene inside), and the comfort, warmth and streamlined effect that the smoothskin produces. These are just some of the points that the guys have commented on.

Thank you again and I will report back later with another update.