The Australia Spearfishing team has once again succeeded in claiming the highest title available to a spearfisher in the pacific region by winning the Interpacific Spearfishing Championships! Being held in Flaxmill Bay, NZ, the Kiwi team were the favourites for winning. The areas we were to dive are their local spots and they knew it like the back of their hands. But after just a week of scouting the areas and the extensive knowledge of fish and their habitats that the Australian team has acquired over their years of diving, the boys managed to rise to the challenge. But it was a nail bitingly close competition the whole way! 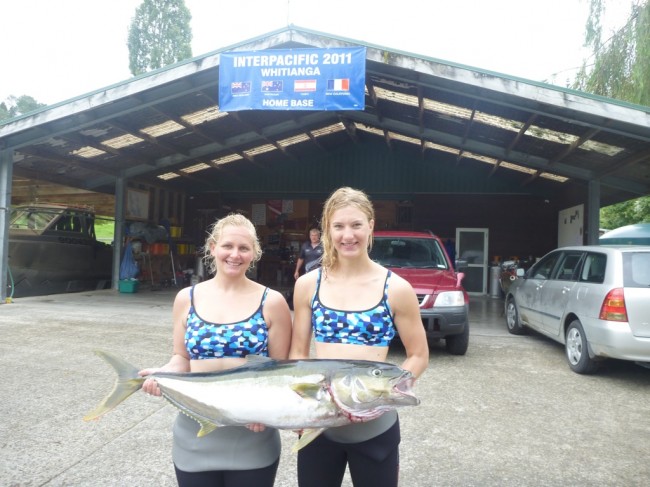 The group of islands known as Cuvea were to host the first day of competition. New Caledonia, Tahiti, New Zealand and Australia launched at 7:20am for a 9am start to the six hour competition. Chelsea and I were on our rest day but were waiting eagerly in the lounge room from 1:30pm, looking out at the bay, waiting to see the competitors return! A bit after 4 oçlock we spotted the first boat and rushed down to greet them. Interpacific Championships allows 4 fish of each species to be weighed per each team of 4 divers. Tahiti was first to weigh in and had a great haul of 43. Australia was next and there were “öoooh”s all around as the boys dragged their four full bags of fish to the weigh in site. After all the team managers had weighed and measured the fish to make sure they were within comp requirements, we ended up with a count of 47. New Cally had 35 fish, and the Kiwi’s were close to pulling hair out when they found that they had come second for the day with 43 fish. “Don’t worry”, they assured everyone, “the second days site is the Alderman’s and that’s the spot we know best!”. So the scores after the first day were:

The winners of the day get 100% and the rest of the teams get a percentage which represents how much they got compared to the winning team. Here, for example, NZ got around 5% less than Australia’s catch for the day.

The second day was the girls chance to compete. Our site included Double Island, Peters Rock, and Mercury Island. It was mine and Chelsea’s first interpacific competition and we knew we would have to discover some magic hidden talent to beat the Kiwi girls Jess, who has been diving with her Dad since she was a young girl, and Shirley, who has been competing in the interpacifics for 12 years, as we have both spearfished for less than 12 months! We had a 9am start to the 6 hour comp. Over the course of the day I managed to bag 2 pigfish, 2 butterfish, 2 parore and 1 blue maomao, as well as a snapper that was 2cm under the required comp size of 35cm, 2 koheru that didn’t weigh, and a kingfish that we used for burly. My partner Chelsea got a good Kingy that weighed 13.15kg, a blue maomao and a pigfish that we used for burly also. It was tough diving but an enjoyable day overall and the Kiwi girls took out the comp with 8 more fish than the 9 we weighed in! We were happy with our effort though, and to take home second place in the competition. 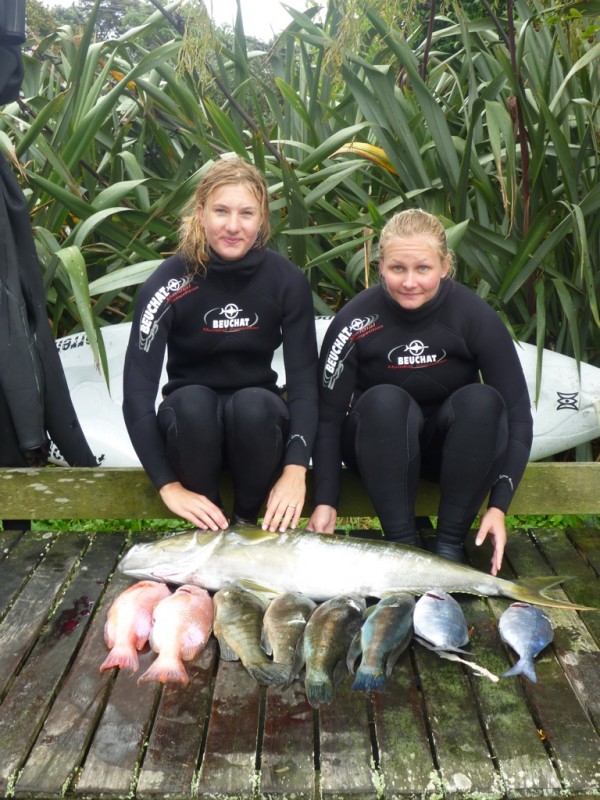 Saturday was the final day for the guys. Herb, the Kiwi manager, had his boys out at Alderman’s the previous day to ensure they got as much practice in as possible so as to not lose in the comp! But as the guys pulled in for the day, the whisper on everyone's tongue was that the Tahitians had absolutely smashed it for the day. Australia was first to weigh in with 49 fish, an upgrade from the previous day, but as Tahiti emptied their bags we soon discovered they had shot 57 fish between the four of them – uh oh. NZ weighed in 48 fish and New Caledonia weighed in 45. New Zealand was disappointed to say the least but took comfort in the fact that they at least didn’t lose to the Aussies! We were scratching our heads, adding up the figures frantically, trying to figure out if we could have, somehow, won on weight... Was it possible? Tahiti was 4 fish in front of us, that’s 400 points, and with only 10 points per kilo up to 7kg awarded for weight the Kiwis assured us it was not possible. But we had our 4 big kingies... we had done the math... it was going to be close.

The competition director headed to his office to count the figures and came back to announce the scores. “For the overall competition”, he said, “we have New Caledonia in fourth place, NZ in third place... and finally, by 3.26%, we have Australia..............OVER Tahiti!”. There were cheers all around from the Australian team.

From trawling for Marlin with the Kiwi girls, to having my first encounter with a mako shark, shooting my first snapper through the eye balls, and, of course, diving with and learning from some of the top spearfishers in the pacific region, my first interpacific championships was an amazing experience and one I will never forget! Congratulations once again to the Aussie team Guy Wood, Adam Smith, Drew Fenny and Ryan Roso, and the teams dedicated manager Allistair MacNeill – you guys are truly fantastic. And of course, a massive thanks to Adreno and Beuchat for supporting Chelsea and I in our trip across the pacific – without your wetsuits we surely would have frozen! This time next year we hope to be diving the interpacifics again – in HAWAII!