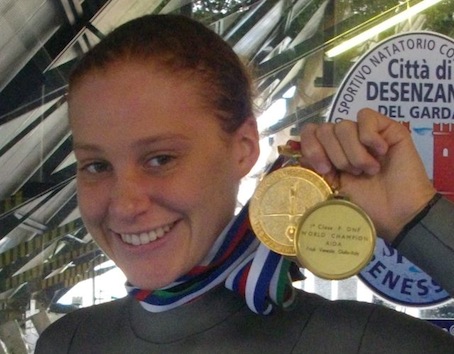 Jody Fisher, a young but very accomplished classical guitarist and avid swimmer. She started freediving in 2010 and decided to compete at the Freediving World Championships. She won gold.  Jody has set fifteen national records across all competition freediving disciplines and was awarded 2011 AIDA International Newcomer of the Year for her achievements.

Jody is a real champion and we are proud to have her on board at Adreno to share her freediving stories, techniques and record attempts with all freedivers who regularly visit this blog spot!

Here is her first blog for the Adreno Spearfishing and Freediving blog page: Eighteen months ago, a friend introduced me to the sport of freediving. As a former competitive swimmer, I’ve always loved being in the water, so it was only natural that I’d find being under the water even better!

Within the first week, I was hooked. It wasn’t only that I feel most at home in the pool or the ocean: as soon as I began researching the sport, I couldn’t believe how many physical adaptations we have that allow us to do deep diving – it’s a fascinating subject and modern science has barely scratched the surface (admittedly the sample size of humans who can go deeper than 100m is relatively small!).

This has upsides and downsides: one positive is that it’s an exciting field because there are frequently milestones being broken and there’s always something new to find out. The biggest negative is that the general public, and even doctors working in hyperbaric/diving medicine, usually know next to nothing about the sport, making it an uphill battle against popular prejudice.

In my first year of training and competition, I was fortunate to have coaching from many of the world’s best divers, traveling to Hawai’i (Kona), Italy, Greece (Kalamata), New Zealand (Lake Taupo and North Island South/West coast), and having the chance to attend World Championships.

I’ve had a break from training since Worlds, but over the next six months I’ll be building back up, working intensively with yoga, pool training and depth diving. Finally I’ll do some more competitions, hopefully diving longer, further and deeper than I was last year.

More exciting will be the chance to get back in the water with sharks, dolphins, and, if I’m lucky, whales. (Hopefully I’ll be able to shoot a few fish in the process as well.) I’ll post updates as I go!