A while back i took Corey out for a quick swim chasing Mahi Mahi, (dolphin fish), unknown to myself at the time he had never been out chasing fish in blue water on fads before.

It brought back memories of my first times chasing Mahi Mahi at the fads with the boys - Sharks, Marlin and Mahi Mahi.

Corey ended up with three Dolphin fish, all small though the thing with chasing Mahi Mahi is persistence. If you were to dive the Fad every day of the year or season you would eventually get the big one.

I guess that is one of the keys to getting big fish or prize fish while spearfishing, Time in the water equals results. your not going to get any fish while playing the playstation. :) 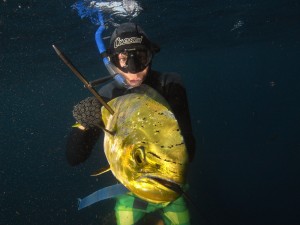 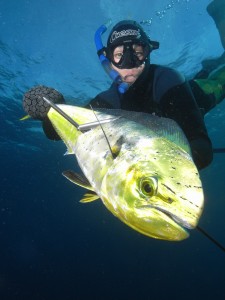 Here is a photo from years ago while chasing Dolphin fish, We had spent almost everyday of the season chasing these fish, getting fish around the 14kg mark when this female (cow) swam in for a look, she went 18kg taking the NSW record. Only to be broken 12 months on at 19kg then again at 21.9 kg where it still stands 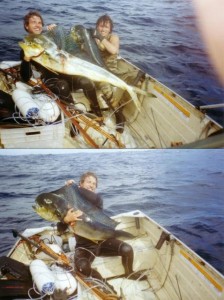