Once again the Annual Nelson Bay big fish challenge was a smash hit in terms of diver turn out and positive outcome for the sport of Spearfishing. The comp was originally planned for February, but due to weather conditions it was moved to April 13th which turned out to be an excellent time of year to hold the comp at majestic Nelson Bay this year.

We were blessed with calm seas and weather that spearos often dream about. Reports of 15m vis and warm water from local divers last week had competitors rearing at the chance to jump in.  There were a total of 38 divers signed up; a majority of those had come a long way to dive this annual competition. It was also encouraging to see a fair few divers signed up or renew their membership to the USFA as a result.   The rules were simple: only one fish per competitor and biggest fish (by weight) wins. A comp like this really highlights how sustainable a sport like spearfishing can really be without detracting from the essence of competition. That's a win for the environment and a win for the sport in my opinion.

As 9am ticked over, all the comp boats lined up outside the 8 knot zone of Shoal Bay for the standard rolling start, then it was on for young and old with the 200HP weapons taking the lead very quickly. 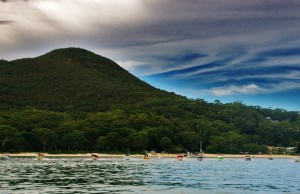 Perfect spearfishing conditions as the boats race to their best spots.

Competitors saw some very big fish and a few respectable sized kingfish were also landed. One of the competitors managed to land a Cobia which is not that common in these parts. Great effort by Bill Rule on that catch.  It was mainly big kingfish that took out the top 10 prizes that once again have been generously donated by our sponsors. (see attached photo of Adreno wetsuit winner - Dino Williams). As always we are very appreciative of such generosity, especially to Adreno who continue to donate fantastic prizes year on year. 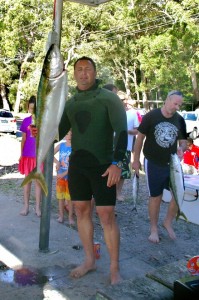 Dino Williams with his prize-winning catch. 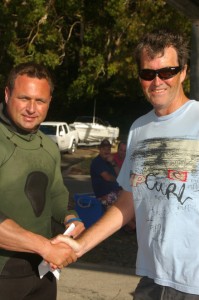 This year some of the up and coming Juniors have done very well, landing decent sized fish to place them up there with the seniors. We also had a mystery weight category which ended up being 1.7kg. Both Peter Walsh and Al Cooke shot the exact same species and weight of this size so a simple coin toss was used to determine the winner. 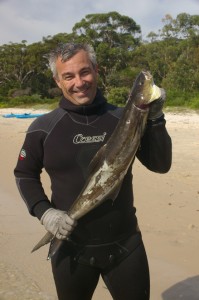 Not a common catch in the area! A great tasting Cobia.

The day ended with competitors treated to pizza and soft drink and not too many dramas at the ramp due to the tide being favourable.  The day would not have been such a success if it weren't for sponsors like Adreno chipping in for the prize pool.  On Behalf of the Living Water Freedivers I'd like to sincerely thank you for your ongoing support of our competitions. 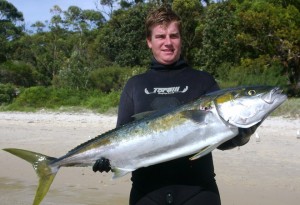