Tony Heugh is a well-known, respected spearfisher from SE QLD. This is some invaluable and indeed lifesaving advice from Tony, who has been actively involved in all aspects of the spearfishing world for many years. 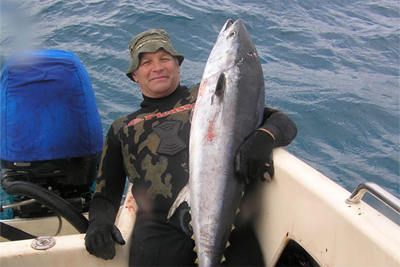 I was out diving with one of the top divers from the TGC about a week ago - he did not have a float - I asked him why when I found out - he told me he no longer uses a float and prefers to dive unhindered with a reelgun - wind was strong SE all day with plenty of white caps, overcast and rain.

The others and I had difficulty keeping tabs on the floatless diver and were concentrating effort on maintaining eyes on his position, whilst compromising eyes for the divers using floats. I thought this to be a selfish attitude and have decided not to take divers without floats on my boat again, unless they have a valid excuse not to have brought a float.

I see no reason why divers, who prefer to use reelguns, should not also tow a float - just mark the spot you are diving with a drop weight and dive around it with the reelgun - that way the boatie has a reference point to look for the diver, handy in adverse conditions - also the boatie will not run a diver down, accidentally, if he knows not to go near a float where there is no diver in sight. A well-known diver was run over by his boatie whilst using a reelgun and died! If one's own boatie can run down a diver without a float - there is also a good chance such a person could be run down by another boat in the area - especially if there is no float to indicate the presence of a diver.

There is a group of AUF divers, who are prominent in this area (Brisbane), who are not using floats whilst diving - no need to mention names, they know who they are!

Possibly a good follow up slogan for the safety sticker "FLAG + FLOAT = DIVER", would be "NO FLAG, NO FLOAT, NO DIVE"!

I may be an 'old fuddy duddy', set in my ways, but we need to think about who is affected in an accident, who gets held responsible and how many lives are compromised apart from the one immediately injured! There could be indirect repercussions if boaties wind up compromising their attention to divers with floats, whilst concentrating their efforts on keeping an eye on those without floats!

I understand there to be situations during social dives, when a reelgun could be used without a float e.g. jumping overboard for a quick look under the boat, in calm conditions, without wind or current, whilst the engine is turned off and the boat sporting a dive flag.

Not when there is strong wind and current, overcast conditions with rain and no clear vision of land!