After a day of diving in what seemed like a washing machine, with 30-35knot winds and large seas, we were stoked to find that Sunday brought beautiful weather and the Alliman Shield was a go ahead. After Pedro’s usual competition breakfast of toast with olive oil and salt, we pushed off at 8:15am for the start to the five hour comp. It was my first competition from a boat, and I loved the start off, with boats racing and divers airborne as they hung on for dear life. Although Emmanuel’s 7.5m RIB that he uses for charters has four seats, it was clear that it would be more comfortable to stand. We were going that fast that my hair tie was blown from my hair in the first five minutes! Marty joked about running out of fuel, though it may have been a real possibility as at the speed we were doing, the thirsty twin 200 yamahas were chewing away 145L of fuel per hour! 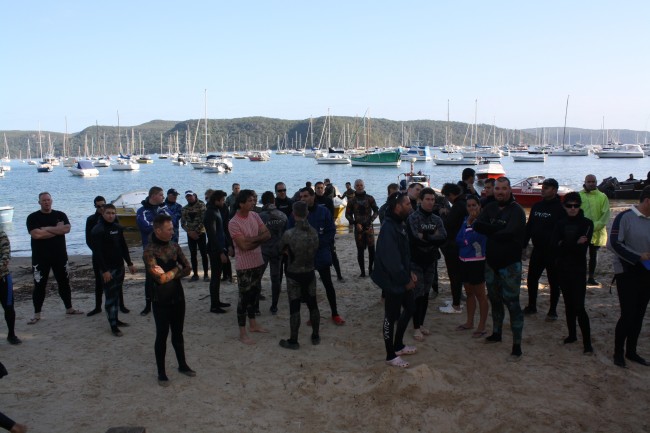 Having dislocated my knee last Sunday I was quietly concerned about the rough trip out, though I didn’t say anything. After all, I was diving with the likes of Emmanuel Bova, Paul Roso and Pedro Carbonell, some of the top divers in Australia and, indeed, the world! Who was I to hold them back? So I just held on and enjoyed the ride. It was a truly magnificent day. The sun was shining, the water was calmer than we’d hoped for, and as we passed beach after beach, with the music blaring to set the mood, I couldn’t help but think, as I have done so many times since I started spearfishing – what an awesome life I have. And with the look on Pedro’s face, I’m sure he was thinking the same.

We stopped off at our first dive location, and I was told it was called Long reef (youtube longreef white pointer!). We jumped in and, as planned, I stayed with Pedro. The visibility wasn’t fantastic, maybe 8m, but I could still see the white glow of the “Beuchat” sign on Pedro’s fins when he was on the bottom in 13m. I noticed that he was a very ‘quick’ diver. He’d get down there quick and, once on the bottom, he would move along fast to cover lots of ground before finding a fish to shoot and returning to the surface. He certainly didn’t stay down there for minutes on end; he just got down, did what he had to do and came up, usually in under a minute. That wasn’t the only ‘quick’ aspect of his diving though. I have never seen someone shoot a fish, dispatch of it on a float line, and re load so fast! The whole process would’ve taken him no longer than 10seconds, and we were off again! 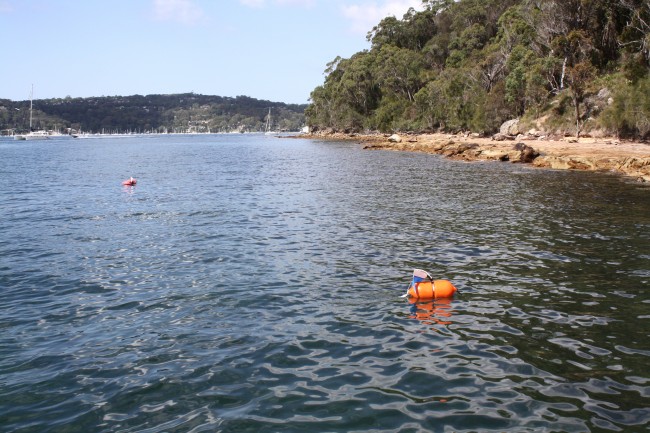 We continued swimming. Pedro was breathing up when I popped my head above the water. I’m not sure what I was looking for, I just felt the need to look, and behind a bit of swell I caught a glimpse of something black in the water. I put my head back down – a bird, I told myself. But a sixth sense told me otherwise and I double checked. Sure enough, Pedro and I were being circled by one LARGE fin. I put my head under water, but with the bad visibility I couldn’t see the shark. I popped my head up again, it was only 5m away. I grabbed Pedro “big shark” I said with my hand to my head and making a circle with my other hand to indicate it was circling us, and I pointed it out. Pedro dropped his head underwater, held his gun out, and started doing frantic 360 degree turns! It was worse that we couldn’t see the thing. I wished we had. The boaty was tending to another diver a fair distance away. Eventually I was able to cooee him over and Pedro and I jumped in and told Adam about the shark. He said the other guys had had a 6ft whaler on their float lines for a while as well. We moved on from longreef, there wasn’t much around, though most of the guys got their red morwong and drummer. Marty got a nice goatfish that Roso claimed he’d stolen from him and a couple of them had their bream too.

Our next dive site was on a stretch of rocky cliff with various points that extended out into the ocean. The visibility was a bit better here and Pedro returned from his first dive with a nice leatherjacket. Again, he asked “good good?!”, “Yes!” I said and he threw his arms in the air and cheered and laughed because he’d finally gotten something other than a morwong to weigh in! After that, there were no more mishaps of shooting the wrong thing and he got a nice silver drummer, black drummer, bream, goatfish and goldspotted surgeon. We jumped back in the boat and Pedro went to work some deeper ground so I jumped in at a different point that was only 12m deep. It was nice. I saw lots of red morwong, silver drummer, a school of surgeon, and a few bream and various species of leatherjacket. A few small kingfish hurriedly swam by at one stage too and, although they wouldn’t have weighed, they were probably the best fish I had seen all comp! I enjoyed diving in Sydney, the water was cool, but my new 3.5mm Beuchat wetsuit kept me perfectly warm, and the ground and species reminded me a lot of New Zealand. I especially loved the fact that so many of the places in Sydney to dive were easily accessible from the shore!

It was nearly time to head back in, so Adam picked us all up. We had time for one last dive on the way back, but we were probably only there for 5 minutes until it was time to get going again. Pedro was last to be picked up and as he swam over he held the head of a jew fish out of the water, it’s gaping mouth big enough to swallow my head! Our jaws dropped, “Good good?!”, he again asked. “Nahhhh,” said Roso, “throw it back”, and we all laughed. The guys were amazed. 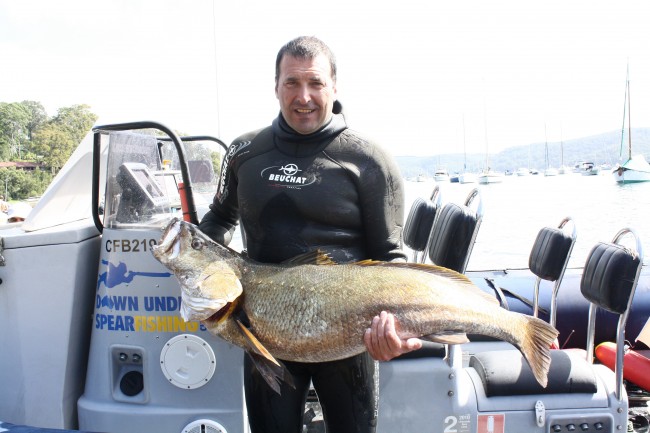 On returning to the beach, we were greeted by similar jaw dropping reactions as Pedro threw the 18kg Jew fish over his shoulder and made his way up to the weigh in area. I’m sure that everyone there stopped and stared and, for a moment, there was complete silence. “Does he know that guys wait 30 years to even see a fish like that?”, someone asked. He was given the jewels out of the jew fish and decided he would hang them around his neck when he got back to Spain. It was a perfect end to Pedro’s Sydney spearfishing experience.

After some more photos and signing, we packed our gear in the car and headed for Sydney city. We walked around the markets, under the harbour bridge, through circular quay and right up to the opera house, taking many photos along the way. It was a beautiful afternoon. We stood next to the opera house and looked out over the harbour as the sun set. We grabbed a bite to eat at a small Japanese restaurant, where Pedro and I tried Tokoyaki (octopus) for the first time. By then, it was 7pm and with a 9pm flight to catch we waved goodbye to Sydney and headed for the airport.