When Adreno Founder Tim Neilsen was planning how to celebrate his 50th birthday close mate Adam Smith mentioned he should join him on a trip to Ascension Island, one of the most remote locations and extreme spearfishing experiences on earth.

Tim has just returned from his epic 12-day spearfishing trip to Ascension Island with Adam and fellow spearo mates Rob Torelli, Andrew Cutajar and Ed Godinho and while weary he is still on a high from the experience.

“Ascension is home to some of the biggest pelagic species in the Atlantic Ocean and was always on my bucket list,” says Tim.

Located around 1600km from the African and 2250km from the Brazilian coastlines, Ascension Island attracts spearos from around the world keen to land a personal and even new world record. 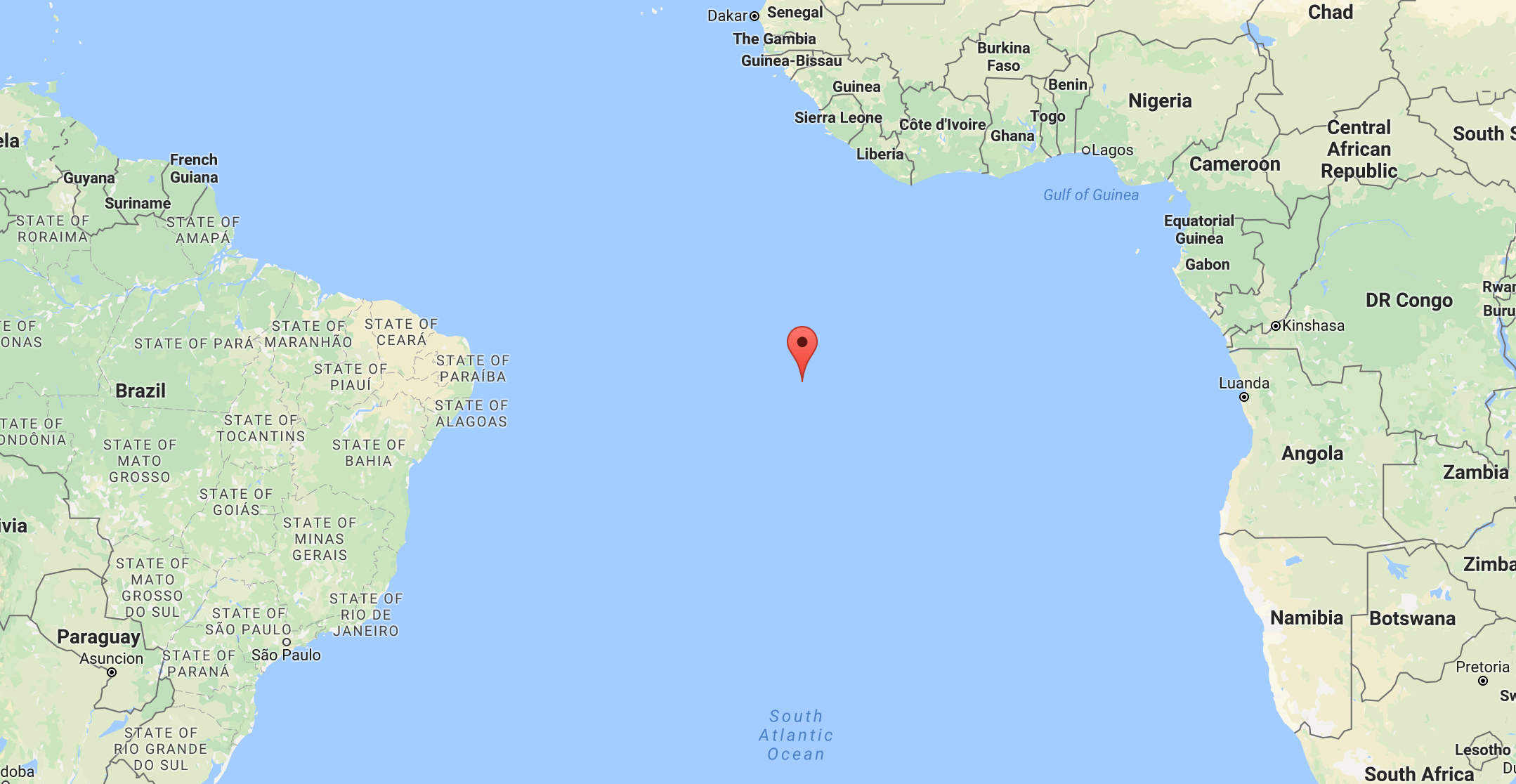 Ascension Island is one of the most remote spearfishing locations in the World!

“After seven days in the water I landed my biggest ever fish - a yellowfin tuna weighing in at 89 kilos,” says Tim.

“We all landed some huge pelagics including a monster yellowfin tuna by Cutters (Andrew) weighing almost 113 kilos.” 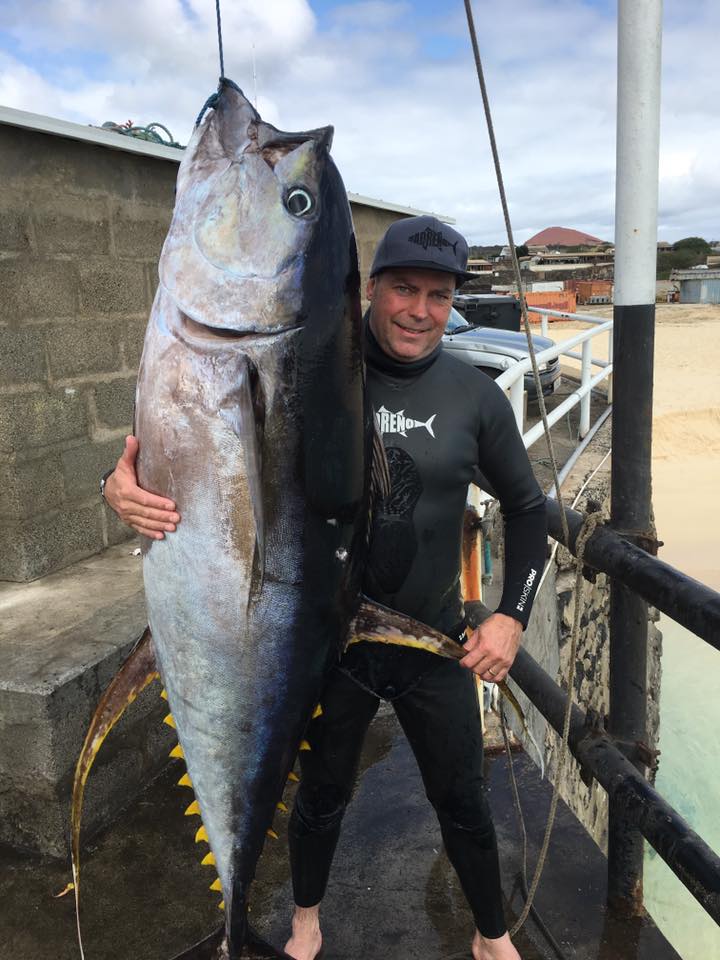 But while an assortment of pelagic fish attracts spearos from around the world, so too has it drawn a large population of Galapagos sharks. Scientists are still investigating while Ascension Island has what locals are saying is the biggest population of sharks in the waters for more than 50 years.

“One theory is they changed longline fishing rules which may be reducing the number of sharks caught, while another is the sardine run didn’t occur this year so maybe the sharks are coming in closer to a new food source,” says Tim. 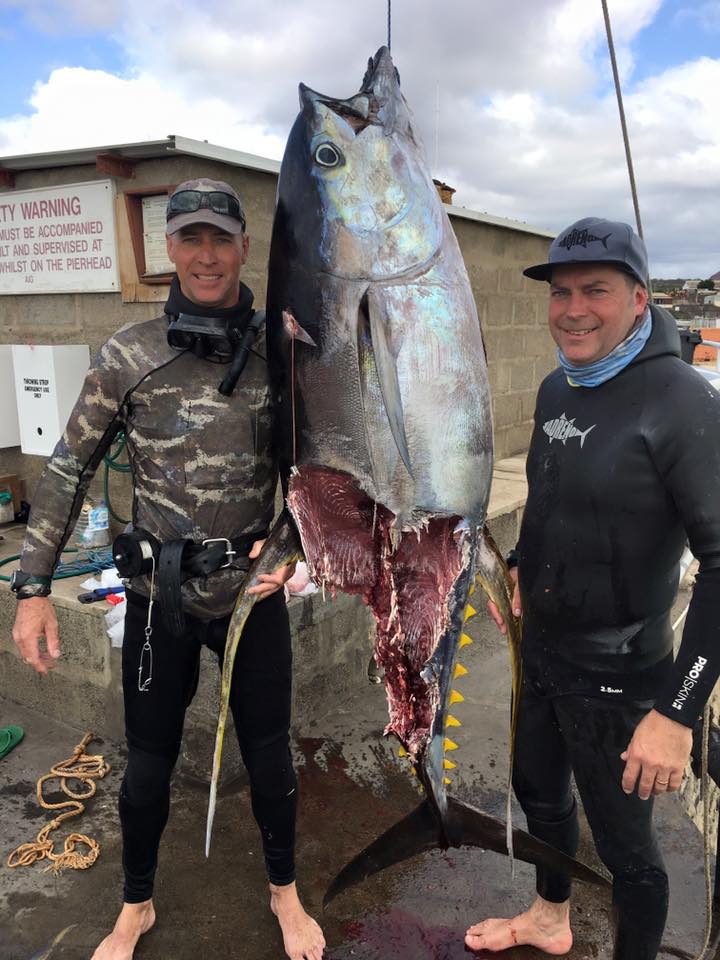 Sharks sometimes got the better of their catches! Only a couple of years ago, sharks were extremely rare to see at Ascension Island

“We had to be vigilant and worked as a five-man team with one person on the big gun, another on the burley and three people on shark duty.

“Quite often all five of us were in a circle back to back with spearguns facing outwards fending off up to 15 sharks at a time trying to eat the bag of sardines.” 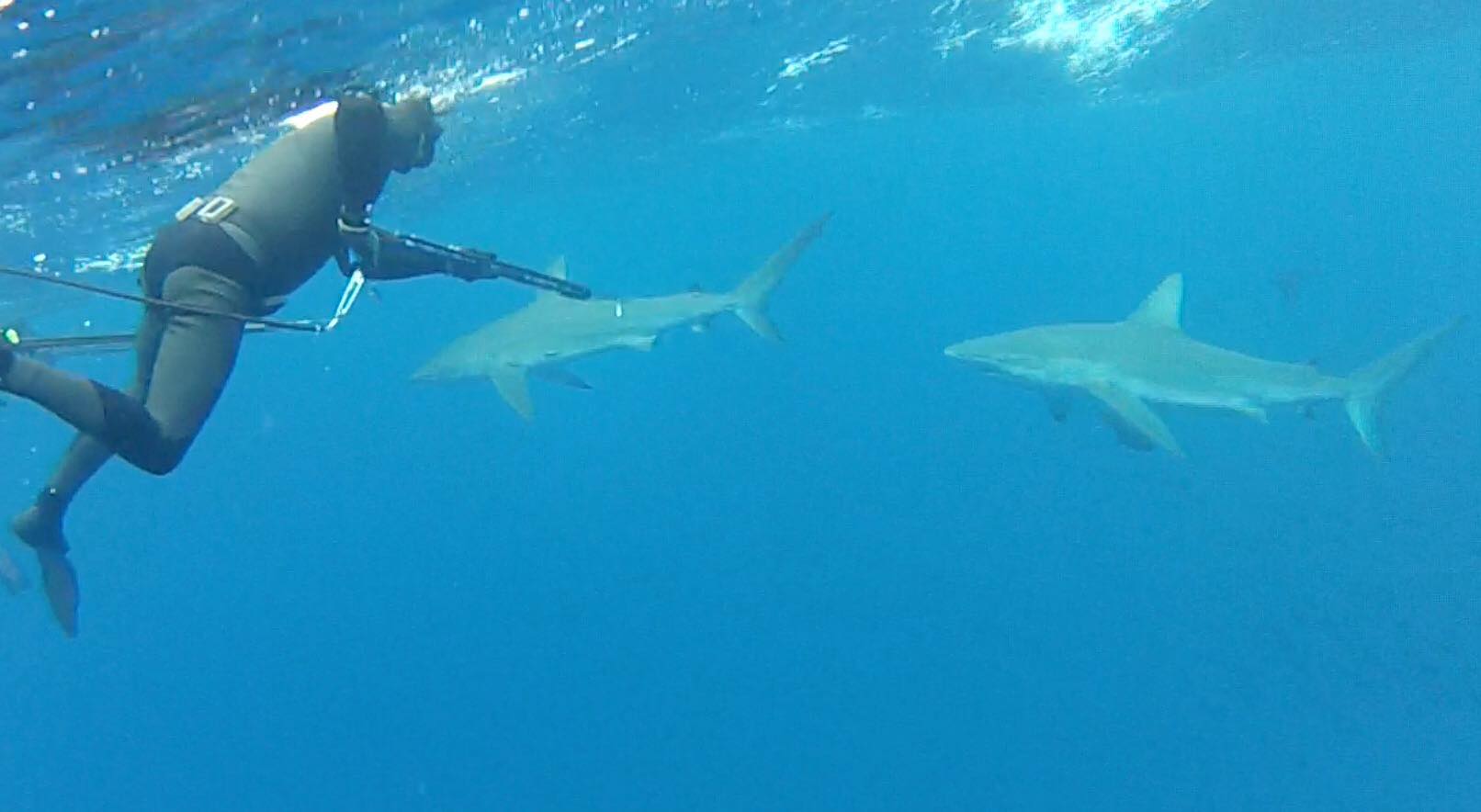 Tim admits to leaving some of these finer details out when he spoke to his wife Michelle back home. On another occasion, Andrew dropped his watch off the wharf and jumped in to retrieve it without a mask and fins only to have a huge Galapagos shark swim between his legs within seconds.

“We were screaming shark at Andrew and he couldn’t hear us for a moment, but as soon as he saw the shark between his legs he almost walked on water and was out pretty quick,” Tim says. 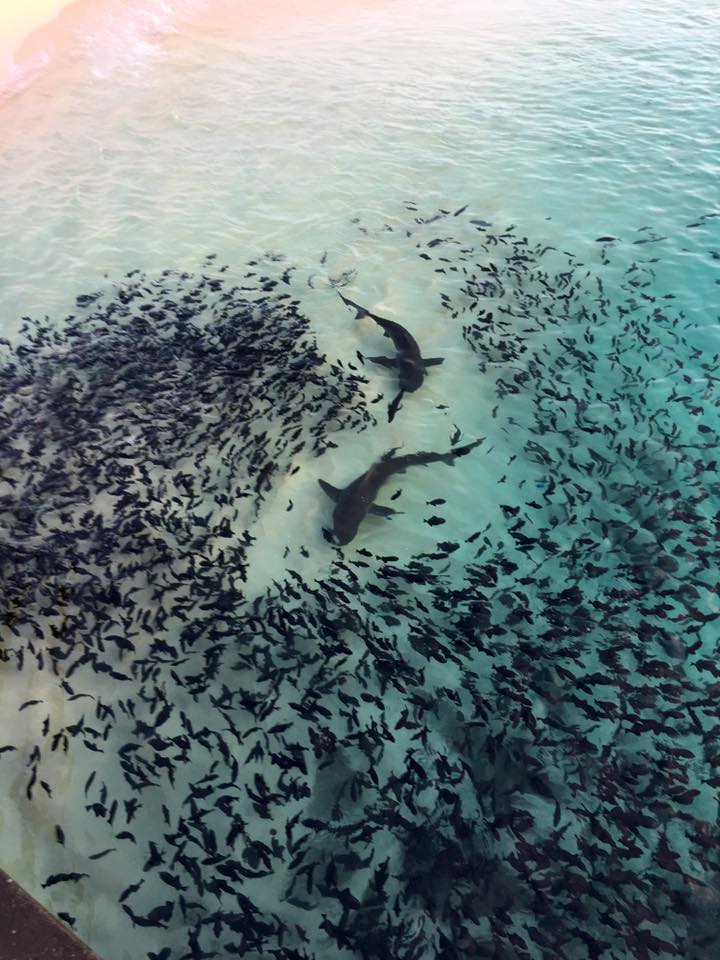 Andrew jumped in here to grab a watch he had dropped and got a fright when the sharks turned up, rushing between his legs!

A highlight of the trip for the group was eating their fish with none going to waste.

“We created some delicious dishes and the fish we couldn’t eat was eaten and appreciated by the locals,” says Tim. 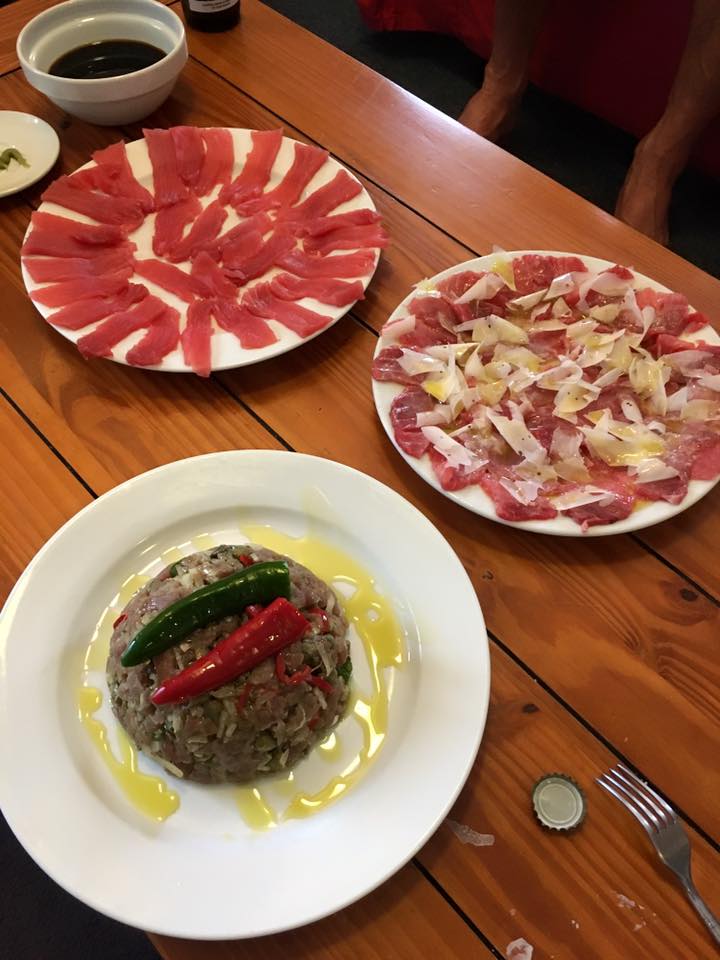 While Ascension may arguably be the world’s spearfishing capital on days out of the water Tim and his mates enjoyed exploring the land.  The isolated volcanic island has a rich history.

It is governed as part of the British Overseas Territory and during World War II was an important naval and air station.  The island has a US air base and was once an emergency runway for NASA space shuttles.  Ascension hosts one of four ground antennas in the world that assist in the operation of the Global Positioning System (GPS).

“Ascension has quite a unique landscape with most of the island looking like the surface of Mars with arid volcanic rock and void of vegetation,” Tim says.

“Although there is one mountain called Green Mountain covered in rainforest plants.

“This happened as a result of the famous naturalist and geologist Charles Darwin visiting back in the 1800s and suggesting that by planting up this particular mountain rainfall on the island could be improved.” 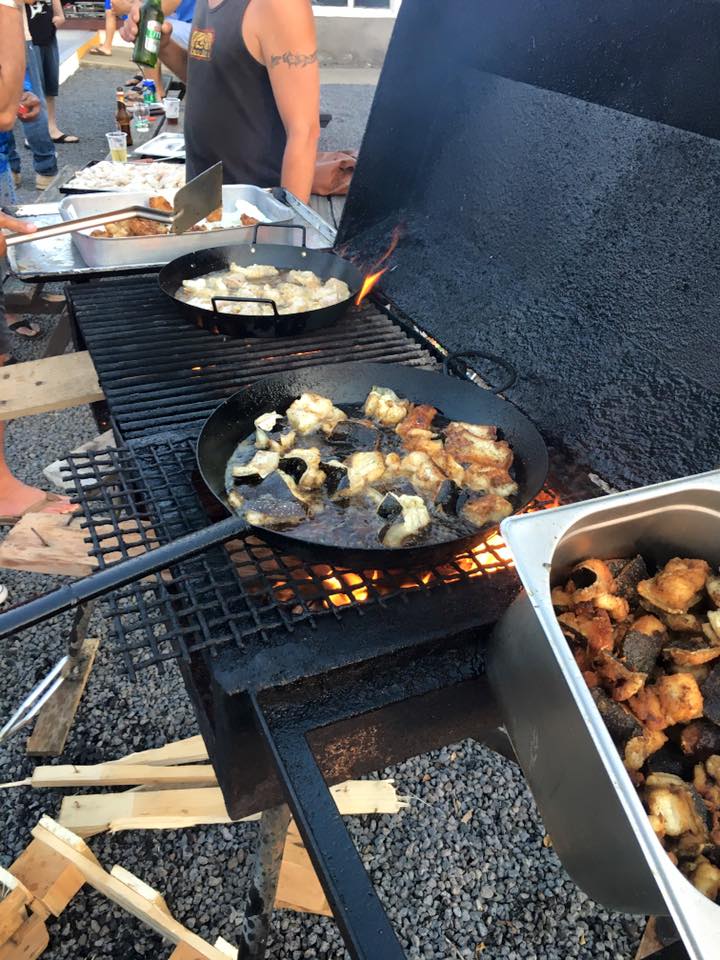 Adam, who is a marine scientist and former Great Barrier Reef Marine Park Authority director, passed on some of his valuable knowledge to the local conservation park to help formulate the island's first ever fish management policy.

“All fisheries changes have advantages and disadvantages,” says Adam.

“The key to a special place like Ascension Island is going to be government, community, fishers and scientists working together to build trust and focus on agreed principles, process, benefits\costs and sustainability.”

The journey to remote Ascension Island is an adventure in itself taking the group around three days of travel time.

Ascension Island is home to more than just big tuna!

“We had a flight from London to Dubai, then it’s about a 90-minute drive to Brize Norton where we caught a special RAF nine-hour flight to Ascension Island,” says Tim.

“Unfortunately for us, there was some highway closures so our trip from London to Brize Norton took longer and was more stressful but we got there just in time.”

The ideal time to travel to Ascension Island is between July and September. 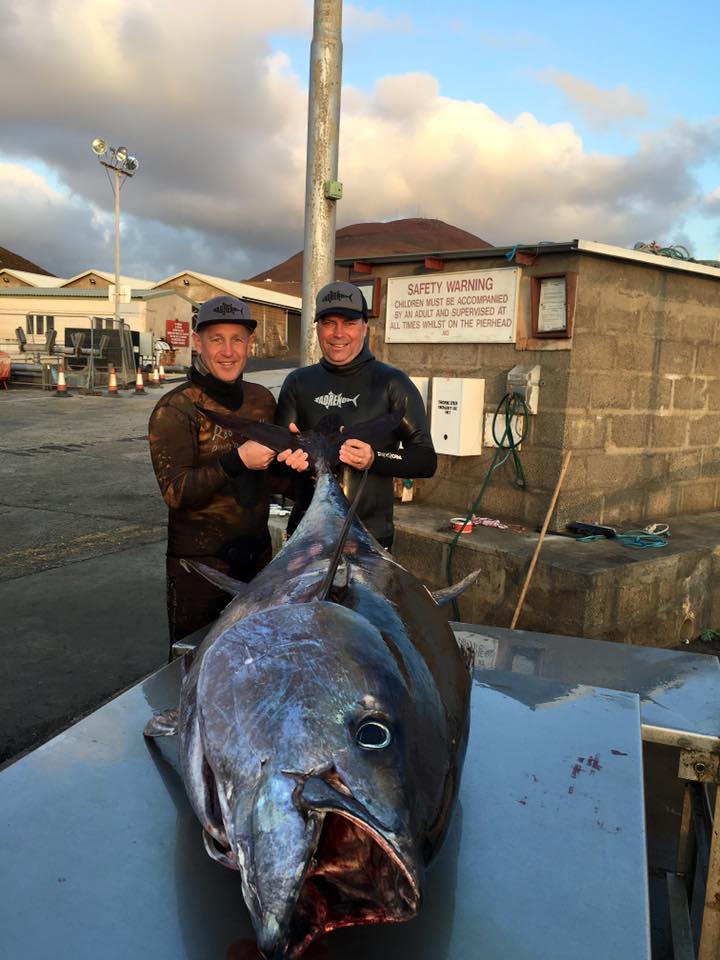 “The water temperature averaged around 25 degrees and we were all comfortable in 3mm wetsuits,” Tim says.

If anyone is planning a spearfishing trip of a lifetime Tim recommends getting in touch with Ascension Island Fishing Charters operator Colin Chester.

It is worth noting you need a special permit and must have travel and medical insurance to visit Ascension Island.

“Colin is a professional who knows his stuff and will help sort bookings and travel details,” Tim says.

“Plan well in advance as there is a lot to organise."

A trip to Ascension Island doesn’t come cheap so spearos it’s probably worth saving now with Tim saying to put aside around $10,000 to $15,000.

“It was worth it and I recommend any spearo should put Ascension on their bucket list.”