Anglers and Spearmen Smoke the Pipe of Peace at The Entrance. March, 1952

Anyone watching the competition between Anglers and Spearmen on the coast between Norah Head and Terrigal on the Anniversary Holiday weekend would find it hard to believe that 5 years ago anglers were playfully running spearmen down with motor boats, cracking them over the skull with sinkers, anchors and oars, while cursing the old boots, rusty tins and wharf puled the underwater lads attached to their hooks.

Our patron, O.J. Collidge, who is also patron of the Entrance District Anglers Club, patron and founder of the Australian Anglers Association and the leading fishing personality in Australia, brought about this "get together" while the hard work of the committees of both U.S.F.A and the Entrance Club made it a success and a fitting climax to the years of hard work done by the U.S.F.A committee, led by Dick Charles to establish rules that would enable us to enjoy our sport without interfering with other fishermen.

It was a keenly contested competition with the Anglers well in the lead until lunch time on the last day when some of our lads made a late run with some really big fish.

Arthur Horsley's boys feel confident that, given better fishing conditions they would have won easily and are looking forward to another chance next year.

At the barbecue and camp concert 41 Pounds and 14 shillings and sixpence was raised for the Sydney Morning Herald apeal for lifesavers, more than half of it from an auction of fish conducted by Les Hawley.

It is hoped to make this Anglers v Spearmen competition an annual event at The Entrance and Bill Heffernan, one of the foundation members of the U.S.F.A, a retired Vice President and manufacturer of all spearfishing equipment which he sells from his shop in Gosford Road, The Entrance, has offered to donate a valuable trophy to be held by the winning team each year. THANKS BILL.

While appreciating the work of those who were out in front with the oganising of this show, the lads who worked like niggers cleaning, cooking and serving hundreds of lbs. of fish should not be forgotten, they did a job and a half while everyone else was having a good time. 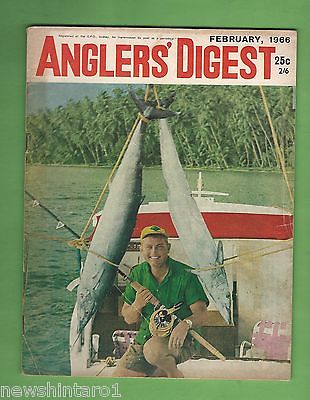 There was an air of friendly rivalry between anglers and spear fishermen when they met in an all-out contest at The Entrance, N.S.W., over Anniversary weekend. This is the first occasion such a contest has been staged and, from reports, it is to be an annual event.

Thirty-seven anglers of The Entrance Club competed against 37 spearfishermen at the first official "clash" at The Entrance, over Anniversary weekend.

From the Friday onwards car loads of supermen were to be seen converging on Toowoon Bay, where the USFA made their camp in preparation for the concert and barbecue which was to follow the contest.

At two o'clock on Saturday, January 26, the competition was officially opened by Councillor George Fulcher, who was also to supervise the final weigh-in at Toowoon Bay.

The rules of the competition were then explained by both club Presidents (Dick Charles and Arthur Horsey), who pointed out that the individual rules of each club were to apply, with the exception of scoring. The anglers' fish were to be at least legal length and the spearman's 25 percent over legal size. Each fish earned one point per fish and one point per pound; all fish entered to be used for the combined barbecue on Saturday night. The area to be fished extrended from Terrigal to Norah Head.

The prospects of many fish being caught by either team were dashed by a strong southerly, which had blown big seas up, making it extremely difficult for the spearmen to find sufficient lee's to fish. However, within a few minutes of the opening speech, members of both teams were on their way to favourite spots; each man out to do his best for his club.

At the first weigh-in at Tim Farrel's Sports Store, he USFA team had turned in some very nice fish, including a 9.5lb flathead speared by T. Davis, and a 20lb silver drummer speared by C. Wilson, and several good morwong and luderick. The anglers had not turned in any fish as yet, as most of them were still out fishing.

The anglers snatched the lead at Sunday's weigh-in, George Littefield bagging two mulloway (18lb and 12lb) and many whiting.

Brian Hearps fished the beach to score a mulloway (6.3lb) and then went to the lake, where he caught flathead, luderick, bream and whiting in an impressive bag.

Long Jetty rod-and-line man, Ken Fuller, caught a nice bream, but was disappointed that it was only one. The previous night he took 36 from the same spot.

The anglers had made up for their slowness at the start, and took the lead with 95 points to the spearmen's 40 points.

From about noon Sunday, the cleaning, filleting and cooking of fish for the barbecue was underway. Those being responsible were Jack Mason and John Lawson's father-in-law, familiarly known as "Pop". Both of these chaps are to be congratulated on their mighty job. In all, they cooked over 400 pounds of fish.

the final weigh-in took place at the USFA camp on Sunday night, where the spearmen brough in a colossal bag of fish, to win the compeition with a total of 390 points to the anglers' 135 points.

Wally Gibbons was top-scorer for the spearmen, making about 140 points with several silver drummer averaging 18lb each. John Quadling was responsible for catching the largest fish of the competition, being a 30lb blue groper at Norah Head.

Shire councillor, George Fulcher, started and judged the contest, and was rewarded with some fish for his frying pan.

Entrance club president (Mr A.J. Horsey) said after the competition that the goodwill and fellowship between the two classes of fishermen was proved by the fact that, while they both fished the same waters, there had never been one unpleasant incident. The event may become an annual fixture.

Later, at Toowoon Bay, a number of large silver drummer were auctioned, and Les Hawley, honorary auctioneer, raised over 40 pounds for the Heral Lifesaves appeal.

Entertainment was provided by Keigh Vagg, who played melodiously on his jew's harp, helped along by compere "Goofy" Goffy Gapp. Jockey Ferguson was certainly on a winner when he came bounding into the straight on his Melbourne Cup drawn by six lusty spearmen in their version of the "Vulgar" Boatmen. Edward Du Cros also turned on a good act with his imitation of Stanley Holloway. June Egan and May Wells contributed to the entertainment with several songs, each accompanied by young Keith Harvey on a man-sized accordin.

The contest ended with a group of spearmen with their wives and girlfriends still singing into the microphone at 11.30pm.

A certificate of participation was given to each member of both teams as a memento of the competition. The most gratifying thing about the contest was that, although the teams fished among each other at all times, no friction whatever occurred.

This competition should go far in putting the relationship between anglers and spearfishermen all over Australia on a much more friendly basis.

On the Anniversary holiday weekend anglers and spearmen got together at The Entrance in a fishing competition with 37 in each team. The anglers were in the lead until a few spearmen made a late run with some really large fish and passed the post well in the lead.

This Association would like all spearfishermen to send in to this magazine any photographs they may have of notable catches, which will be paid for according to their value, and if you are capable of writing an article, or even a paragraph of general interest, send that along too. It is easy money in your pocket and assists to create interest in your sport.