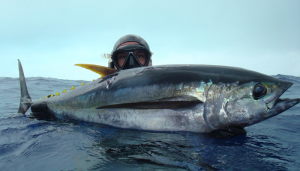 Spearfishing NZ has a great newsletter for their members and we would like to share an article from the latest edition, because we can't focus enough on diver safety.

Spearfishing NZ received an email a week after the National Champs had concluded, which highlighted the responsibility both divers and recreational boat users have in following Maritime Rules. A recreational boat driver contacted the club to complain about some spearfishers who took part in the competition but had failed to mark their location clearly. De boat driver had to make risky moves to avoid running them over and got a real scare. Spearfishing NZ wrote the following letter to its members:

"We divers are an independent breed of sports men and women. By the very nature of our activity we maintain much more independence in what we do than for example, a person playing in a sports team, or a lone competitor in an arena such as a golf course. In those situations there is a defined responsibility on how you will conduct your self built into the culture of the activity.

Divers on the other hand will often make their own rules about how they engage in their activity because the conventions of various other sporting activities do not seem to apply. Or do they? Deerstalkers may be alone, but nevertheless have rules of safety such as identifying their target, checking where their bullet will end up if the target is missed, wearing a colour identifiable to other hunters, carrying a set of antlers upside down and not on the top of their pack. It is these sorts of decisions that help keep them safe while not putting at risk other users of the bush and mountains.

In some ways diving is not all that different. Apart from you and your buddy, you may start out the day alone. Unless you are several kilometres off shore, there is a very high probability you will on a number of occasions throughout the day be sharing the same coastal water with other boat users. If you think about it, when recreational boats are heading out for the day to fish or relax they often travel within 100-300m from shore, the very same stretch of water spearfishers are swimming in. All those passing boats have Maritime Rules on their side that say you should be identifiable as a diver in the water and that means a diver’s flag! 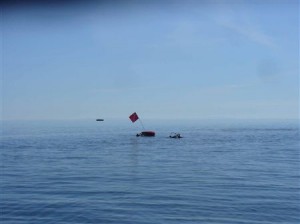 From your perspective you may simply see that flag as a measure for self protection, but it has compelling significance for boaties who know the Rules, telling them to slow to 5 knots or less within 200m of the flag. While many of them know that, less well observed by recreational boaties and divers alike is the Maritime Rule that says 5 knots at all times with 200m of shore!

If you have not got a flag on your float why not organise to get one ASAP and thereby identifying yourself as one who is serious about your own safety as well as considerate towards other recreational boat users."

If you are in New Zealand, or going there on a spearfishing trip, visit the website of Spearfishing NZ for their latest updates on events, competitions and best spearfishing spots. 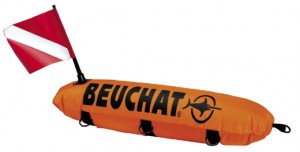 Discount deal You can purchase a good Beuchat Torpedo Double Bladder Float 11L at Adreno. Hurry, because we now have a great special on, and for just $29.95 you are buying yourself a whole lot of safety!