In some respects calling this email a Newsletter is a bit of a misnomer because instead of our usual concentration on events past we are in this edition mainly notifying you of events to come. The next Newsletter will delve more into what has occurred and issues being addressed in various forums.

First up, TV Viewing 3 times World Spearfishing Champion Pedro Carbonell from Spain was in New Zealand recently filming with Matt Watson and the ITM Fishing Show and filming for a DVD. The ITM Fishing Show is shifting to the prime time slot of 7pm on Saturday nights on TV3, starting April 16th and later in the year Pedro will be shown in a full program both here and overseas with the intent of giving exposure for spearfishing in NZ. We are advised that more photos and video of Pedro will be up on www.beuchat.co.nz in the coming weeks. Meanwhile, here is one of the kingfish he speared, this at Hunters Bank south of Kapiti Island and the photo by Graham Mackereth. 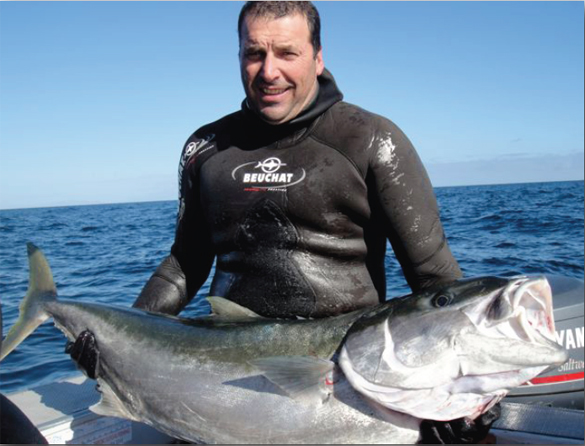 Second notice, Northern Area Spearfishing Competition The Bluefins advise the following. We will be hosting our annual Northern Area Spearfishing Competition out of Tairua on Saturday, the 16th April. It will be a 6 hour swim competition based on the National’s format, probably around Slipper Island but possibly at the Alderman Islands if we have enough larger boats and the weather plays ball. The safety briefing will be held at Gary Conway's place, 42 Cory Wright Drive in Tairua at 0700 on the morning of the competition. You must be present at the safety briefing to be eligible to compete. Contact for the event: John Anderson 021 1322 505

Third item, Lake Taupo Depth Training Weekend April 30 & May 31 Late in March the National Freediving Champs were held in Lake Taupo and not even those who have previously competed in a Catfish Cull competition will have viewed an underwater scene such as this one next to the island in the middle of the Lake. (Catfish competition competitors spent their time in shallow waters.) We were quite taken by Phil Clayton’s photo and thank him for its use. www.aidanz.co.nz, www.aucklandfreediving.co.nz. It was shot while competitors were waiting their turn to descend down the line into the nearby ‘abyss,’ a 100m+deep underwater crater. The underwater ‘playground’ in this photo has been formed by trees that have fallen from the cliff side of the island. 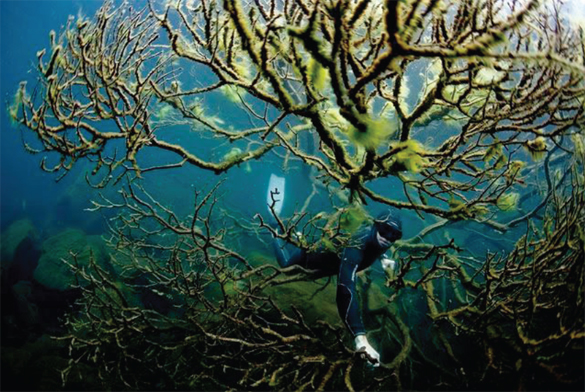 A number of spearfishers competed in the March event, and for those of you with some years of spearfishing experience the freediving training weekend at the end of April could be a program that will add additional competence to your diving skills.