The Game 5 category of the Big 5 competition includes Wahoo, Spanish Mackerel, Trevally, Dogtooth Tuna, and Other Tuna. You can find the entire species and competition rules list here. In this weeks ‘Species Identification’ blog, we will look at the majestic, tasty, and hard-to-land, Wahoo.

The body of a Wahoo is elongated and covered with small, scarcely visible scales; the back is an iridescent blue, while the sides are silvery, with a pattern of irregular vertical blue bars. These colors fade rapidly at death. The mouth is large, and both the upper and lower jaws have a somewhat sharper appearance than that of the Spanish mackerel. Specimens have been recorded at up to 2.5 metres (8 ft 2 in) in length, and weighing up to 83 kilograms (180 lb). Growth can be rapid. One specimen tagged at 5 kilograms (11 lb) grew to 15 kg (33 lb) in one year. Wahoo can swim up to 60 mph (97 km/h) and they are some of the fastest fish in the sea.

The barracuda is sometimes confused with mackerel and wahoo, but is easy to distinguish from the latter two species. Barracuda have prominent scales, larger, dagger-like teeth, and lack the caudal keels and blade-like tail characteristic of the scombrid (mackerel). 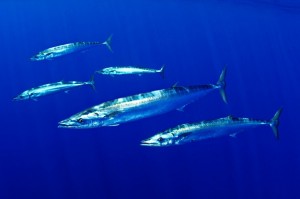 Where can I find Wahoo?

Wahoo can often be found relatively close to shore, and in water as shallow as 8m. However, they are most typically hunted as a bluewater fish on seamounts, or deep reef edges. FADs and other floating debris also attract Wahoo. You will find Wahoo typically in the first 5m of the water column, making them a fish that can often be shot relatively easily. However, the trick lies in landing this soft-fleshed species. 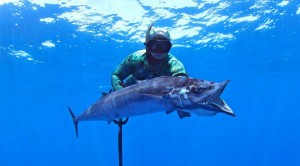 Wade Kohn with his 22kg Wahoo taken in New Caledonia. Wahoo are often found on the surface in the first few metres of the water column! Photo by Travis Hogan

How can I hunt Wahoo?

Like any fish, Wahoo can range from being almost too easy to shoot, to being extremely shy and elusive! It really depends on the individual fish. If you are hunting for Wahoo, you will typically want to be in good visibility, using burly and flashers to spike their interest and lure them in closely. It is said that you should not try to chase Wahoo, and instead ignore them until they come to you. Although you may be tempted to spear the Wahoo from the surface, try to take a small breath and slip silently below the surface 1m of so to ensure that our aim is not interrupted by any surface swell or chop.

Where to shoot a Wahoo is very much personal preference. Some prefer to spear them in the tail between the anal and dorsal fin, as this slows the Wahoo down somewhat and, being a high bone-density area, can also be a good holding shot. However, if you have very good aim, try for a head shot, as Wahoo are known to be quite easy to stone dead. If you are going for the head shot though, keep in mind that the large gut cavity of the fish is located up near the head, and spearing this will definitely result in losing the fish, and the fish dying - which would be a true shame, s consider your options carefully.

A good rule of thumb when hunting Wahoo, or any fish, in clear water is to take a few extra kicks toward them before you take your shot - just to be sure - as their distance from you can be difficult to gauge and you want to make sure that your spear penetrates fully. 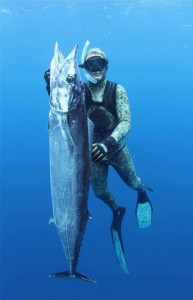 Wahoo are considered a great eating fish. In fact, in Hawaii, they are called 'ono' which translates to 'tasty'. The flesh of the wahoo is white to grey, delicate to dense, and highly regarded by many gourmets. The taste is similar to mackerel, though arguably less pronounced. This has created some demand for the wahoo as a premium priced commercial food dish. Despite the demand, Wahoo as a species are not considered overfished as they are not affected by heavy commercial fishing operations, due to the fact that they do not school together in large numbers like the Tuna. Wahoo are great steaked, seasoned and grilled on the BBQ with fresh salad or vegetables. 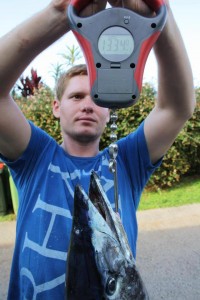 Trent Bailey shows how easy it is to weigh your Wahoo in for the Big 5 competition. Simply snap a photo like this, and a photo of the fish next to some proof of date like your phone, dive watch or a newspaper

Any other general info about Wahoo?

Wahoo (Acanthocybium solandri) is a scombrid fish found worldwide in tropical and subtropical seas. It is best known to sports fishermen, as its speed and high-quality flesh make it a prize game fish.