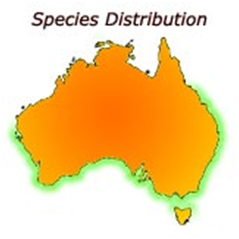 Yellowtail Kingfish are an oceanic surface fish congregating over inshore reefs, around rocky headlands, deep water jetties and channel markers as well as offshore over ocean rocks, offshore reefs and around islands. They inhabit the coastal waters of Australia's southern shores from south Qld to the mid-coast of W.A., including north Tas. Large numbers are found up and down the eastern coastline. They prefer turbulent water and tidal rips and have known to school up over sharp pinnacles of reef, around wharf pylons and rocky headlands.

They are a tough and often dirty fighter, fast and rugged and are renowned for powerful deep diving runs to reefy areas. Once speared, they will often be stunned and go still, giving the impression that they have been stoned. However, within a few seconds they will seemingly come back to life and fight as if nothing had happened – so be prepared for a fun battle! 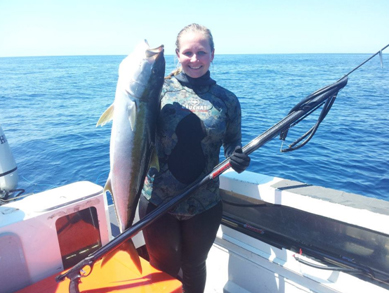 Kingfish can be moody so try a variety of techniques – flashers and burly will be a fantastic tool for getting them interested. Sometimes, they will swim right up to you without any prompting needed, but they can also be quite shy. One tip is to swim at them at speed and then freeze and curl up to make yourself look smaller – curiosity often persuades the Kingfish to come in for a closer look, giving you a perfect opportunity to get a shot. Once shot, remember that they will sometimes act stunned so pull them in fast and dispatch them. As a hard fighting fish, it is often useful to have a bungee attached to your float line and muzzle. 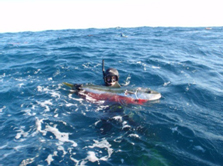 We recently posted a blog about Making Kingfish fish cakes which you should check out. It is also important to remember that some Kingfish will have a disease, known to spearos as the “mushy disease” and earning them the name “cat food” because that is all it will be good for if they do turn to mush! Alternatively, freeze the mushy kingfish for use as burly on your next trip.