With the Adreno BIG 5 competition underway it is time to start giving you some hints and tips about your target species. Over the next couple of months I will be talking to various experienced divers to share with you some of their hints and tips. First up, I will be sharing info on the ever-graceful Wahoo with some tips from multiple Australian record holder, Andrew Sprenger. 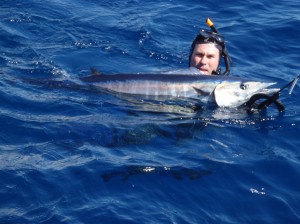 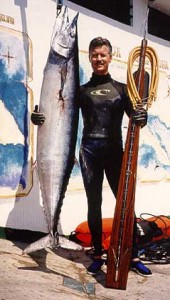 Distribution: Wahoo are distributed worldwide in tropical and subtropical waters. In Australia, Wahoo are found from Rottnest Island in WA around the Northern Territory and Queensland, south to Montague Island in NSW. 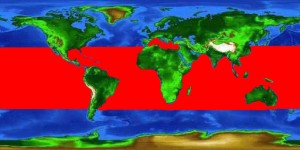 Size: Wahoo grow to a maximum length of 2.1m and a weight of approximately 67kg.

Characteristics: Wahoo are predominantly silver in colour, with 24 or more cobalt blue vertical bars on their sides. Wahoo are the third fastest fish in the ocean, having been recorded swimming in bursts of up to 78km/h.

Recommended equipment: When hunting wahoo there are few pieces of gear which will help you land the fish:

Hunting: Wahoo are an inherently curious fish, generally in the top of the water column either on the surface or a few metres below, and can be lured in with flashers. Andrew Sprenger dives with mirrors attached to his fins and sometimes even his chest when hunting for this pelagic fish – if wahoo are around they’ll usually be following him!

Andrew says ‘if you spot wahoo, you can get them to come in range by freezing, don’t move at all, and don’t look at the fish. If you wait for a little while and look up again they will almost always be straight in front of you. You can shoot them from the surface, but it is best to take a small breath in and slowly duck dive to avoid your shot being interrupted by rough surface chop’. I was with Andrew when I shot my Australian women’s record Wahoo and this was exactly the technique that I used. 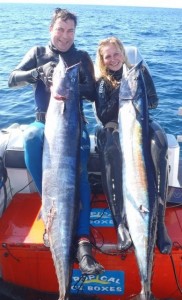 On shooting Wahoo, Andrew advises to aim for a shot between the dorsal and anal fin ‘as this is the area with the highest concentration of bones making for a fantastic holding shot’. As one of the fastest fish in the ocean, a shot through the tail will also slow the fish down as it greatly reduces their ability to use the powerful bottom half of their body. Andrew also advises to avoid shooting the fish in the head unless you are really sure of your aim. ‘With the gut cavities straight below where you would normally aim for a head shot, if you miss it is likely that you will hit this soft area, lose the fish and it will almost certainly die later – which is just a waste ’, he says.

‘Keep in mind when you are pulling a wahoo in that they have soft flesh and will tear off quite easily unless you have a good holding shot. They will run in bursts of high speed power so you will be pulling a little bit in, and then having to let it run a bit. That will continue for a while until you are able to pull the fish all the way in and dispatch of it’, Andrew advises.

So there are a few hints, tips and facts. What are your experiences with Wahoo?