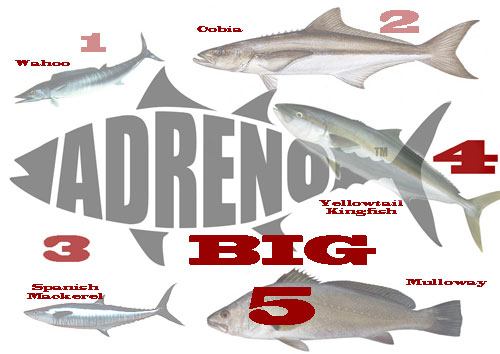 Does the thought of these large predator fish make you salivate, keep you awake at night, and keep you getting in the water even in the worst of conditions? Well, they sure have that effect on the Adreno staff! And so we are excited to announce one of our biggest competitions yet – the Adreno BIG 5 Competition.

Your objective is to target these five fish:

When you land any of them, post a picture within 7 days of capture onto the Adreno Facebook page. Your picture should include the fish’s weight and proof of the date. The proof can be as simple as your phone or dive watch pictured next to your fish displaying the date.  Aim to capture as many, if not all, of these 5 much sought after species in order to be in the running to win some fantastic prizes.

Over $1000 worth of bluewater hunting gear including wetsuit, float, and a 1.4m Rob Allen gun (more details later). The major prize pack will be awarded to the diver who:

There will be five $50 Adreno vouchers up for grabs for the most points earned on each fish.

There will be a $50 Adreno voucher up for grabs for biggest combined weight over all of the species.

You only have until December 31st – so get hunting!

We will be in touch over the coming weeks with information from some spearfishing pros on targeting these fish.

In the meantime: good luck!!!