There's no greater feeling than setting a goal and achieving it. For me, since the beginning of 2011, my goal has been to spear a big Cobia and a big Blackspot Tuskfish. The reason for wanting these two particular fish probably stemmed from seeing pictures of two influential divers with their great catches of these species. Brad Arnott, one of the guys who introduced me to spearfishing, with his 35kg+ Cobia, and Rogan Kinnear, president of my spearfishing club the Sunshine Coast Skindivers, with his 10kg+ Tuskies.

Seeing photos of these two great divers with two beautiful fish gave me my goal. But it wasn't achieved staight away! I've had this goal for over 12 months. Time in the water, and being in the right place at the right time, is all that led to these catches. No deep diving or hardcore training required, just good old fashioned time spent with a gun in hand! This is the best way to improve your spearfishing and hunting skills.

In January of this year I was lucky enough tick off species number 1. The goal which I had set was to land a Cobia big enough for me to put my hands in its gills and puff them out - because that was the picture of Brad's that I liked! 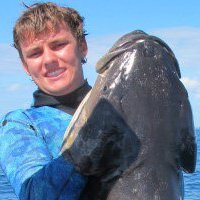 We jumped in at a nice calm spot on the reef to introduce Shae to the beautiful side of spearfishing. I was intending to do a bit of filming of the fish life and playful manta rays rather than spearfishing. But as a manta ray approached on the bottom in 8m, and a shark swam out from underneath it... But I knew better than to think this shark-look-alike was actually a shark. I dived down and the Cobia swam easily under the wings of this huge ray. In the clear water, dwarfed by the monster ray, I didn't realise how big the Cobia really was, and when I pulled the trigger I set my guess at 10kg (it was a big ray, okay!!).

Before I knew it, my entire rig was flying past me and this Cobia was doing summersaults off into the distance with my Aimrite Super Venom-X 1.3 in tow. I chased after it, slowly pulling it in. When I approached it, I realised that the spear hadn't even fully penetrated, but the fish had warn itself out in the run. I quickly loaded Adriana's gun and swooped down to stone the fish with a second shot. Pulling it in was the best feeling. Surrounded by great divers like Adriana Djurasevich and Ray Powell, watching on and filming me in the clear, calm summer day on the reef as I pulled in my biggest fish - not much can beat that! Total bliss. And so my goal was achieved, and I got my 'gill puffing' shot too thanks to Ray! 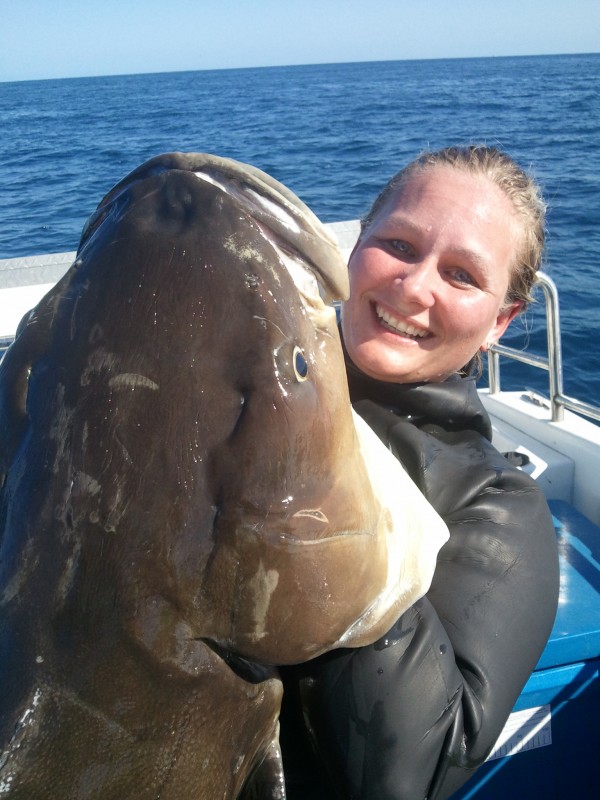 My second goal was a big tusky. Rogan's pictures of himself with these magnificent irredecent blue fish inspired the goal and sure enough, after persistence in the water and plenty of dreaming, my time came. 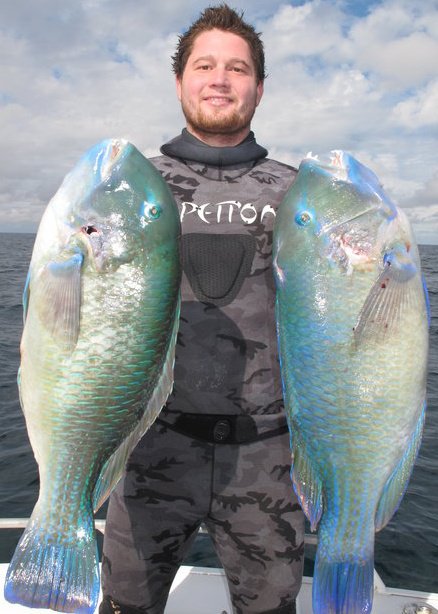 I told everyone that one bigger than 6kg I would be stoked with, but I secretly wanted to hit the double digits some day! Last weekend I was lucky enough to get my first decent Tusky at 5kg, and while I was more than happy, I secretly knew that if Ipersisted back home I could get one even bigger to weigh in for the Big 5 competition. Yesterday was the day, while diving with owner of Adreno, Tim Neilsen, and Adreno staff member Jarrad Pounder off Brisbane.

It was a fairly quiet day fish wise, but still the guys had managed to put some nice fish and crays in the esky. I wasn't feeling it on the reef though and the average vis and lack of anything but Surgeons didn't lift my spirits. I was dreaming of a spot filled with tusky's all day and I knew we would be hitting it on the way home. It was a rushed day - my fault. I had a Maritime Law tutorial to get to by 3 o'clock which meant we would have to start heading home at lunch time. As we dropped in for the last drift I knew that I would be finding my bluey. But after two dives, I hadn't seen even one fish and the ground looked eerily green and untouched.

On my third dive I spotted a 1m ledge. I crept along the sand, carefully approaching the ledge, and a school of 10 small goatfish sprung from their crevice and swam away. A good sign. I continued to pan my surroundings for something else and to my surprise, as I turned to my right, a big bluey materialised from a ditch as if it had just woken up!

My heart raced. This was it! The fish I had wanted for over 12 months. I turned to face it, carefully pressing the record button on my GoPro2 and new GoPro dive housing, knowing that I would want this footage for my video entry into the Big 5 competition (to win another GoPro2!). The fish knew that I was there and began to dance away in a fashion that only a Tuskfish would. I knew they weren't a flighty fish so I did my best to just stay calm, move slowly, take my time, and not act too aggressively.

The seconds before I pulled the trigger were completely peaceful, but when the opportunity presented itself and I let my Aimrite Super Venom-X work its magic once again, all hell broke loose for a few seconds! The tusky sped off, leaving a trail of bubbles in its wake. Typically, he headed straight for a hole and tried to rub himself on every piece of rock he could find. I trusted my shot, looped my float rope around my hand and fought him off the ground.

I yahooed as soon as I hit the surface and Jarrad knew exactly what I had speared even though he was in the boat. As soon as I had my fish safely in the boat I was the happiest person in the world. Jarra said the tusky was as big as the one moulded on the Adreno wall and, while I doubted him, it actually weighed even more than that at 10.75kg.

So there it was. Two goals accomplished and I couldn't be happier about it. My next goal is a Jewfish. Hopefully next Winter I will be able to write about that one, too! :) 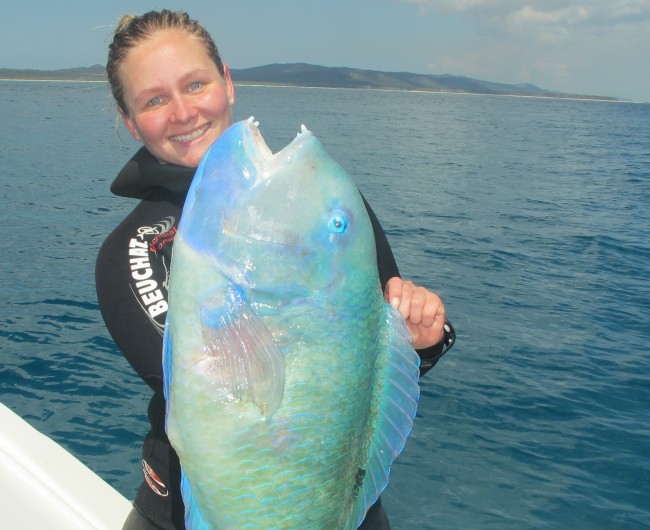