With a day off to spend in the blue office, Andrew and I headed for the top end of Moreton in near perfect conditions. We were greeted at the first dive spot with 40m vis. Diving a small patch of reef in 22m,we noticed a small school of Cobia following some black rays heading reef. Andrew and I chased after them, determined to catch up. Andrew took the first dive, but having not rested from the chase he soon returned without having let off a shot.

I took my time, breathed up, saw the school slowly heading back to cross my path and dived on them. With the crystal clear water I could really see everything that was going on. I quickly noticed that there were one or two stand out fish around the 20kg mark, with the rest of school (up to 30 fish) averaging 10kg. After a long chase I managed to get a spear into one of the bigger ones, but let it hang near the bottom to keep the school around while Andrew breathed up to dive and nail a 10kg one. After a tough fight I managed to land the 19.5kg Cobia. 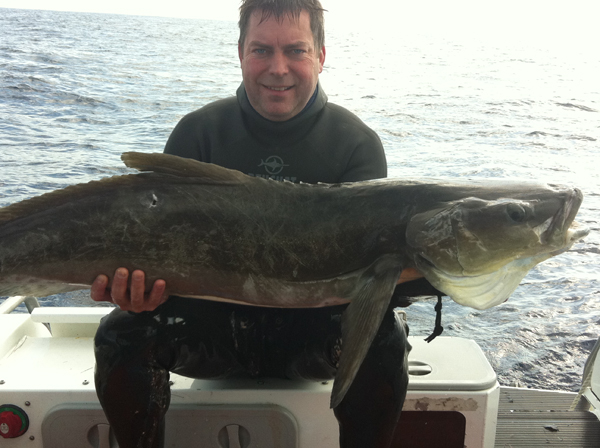 We moved on to another patch of rock. Not one to be outdone, Andrew was first in the water and the first to dive. Upon surfacing he screamed out "huge cobia!". I could see his reel screaming line out. After a serious fight he was back to the boat with a 30kg cobia. We picked up a few Amberjack at that same spot also.

With not much else around, we upped anchor and moved to another spot - a small rock surrounded by sand in 24m of water out towards Hutchies. There was a bit of current present, but the crystal clear water allowed us to see the fish from the surface. I chased a Maori Cod for a while but he stayed in his hole, not wanting to play the game. I drifted with the current for a bit until I came across another bit of rock about 50m away. 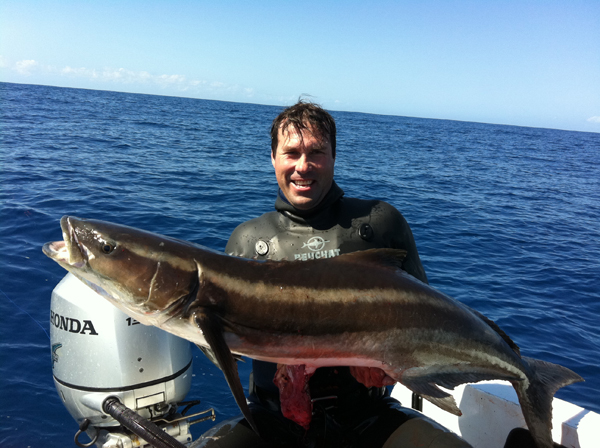 As I prepared for my next dive I noticed the black ray returning with a GT close by. Still not aware of the size of the fish, I dived on it for a look. The GT seemed to be distracted by the ray and didn't notice me approach. When I sized him up my mind started playing tricks - is he 40kg? is 50kg? is he 60lkg?!

Anyone who has really looked at one of these fish close up for a while knows what I'm talking about - it is sometimes really difficult to get an accurate judgment on the size and weight. Sometimes the harder you look, the bigger it becomes!

I don't normally target GTs, preferring to leave them for sport fishermen, some of whom spend a lifetime chasing a fish like this just to catch it and release it. In the split second window of opportunity there were a thousand questions I was processing.

Three main factors that lead to my decision to pull the trigger were that firstly, the size of this GT meant that it could be a new record. Secondly, a friend had told me that he had smoked a big GT and it tasted fantastic. So with a brand new Fish Smoker at work the fallback option if it wasn't a record was still good - the fish would never go to waste! Thirdly, I had a good line of sight with a better than good chance of stoning the fish, meaning my gear would not be destroyed. So I squeezed off the trigger and rolled him over - stoned dead. 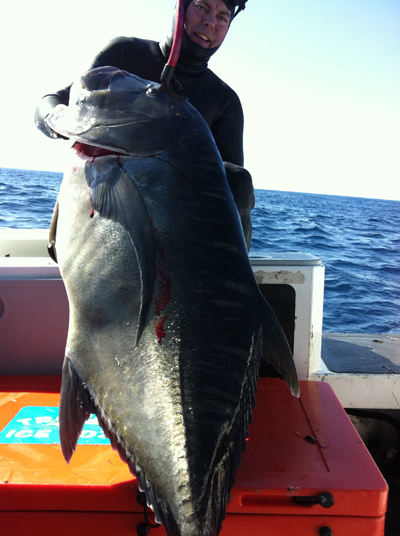 I have quite often lined up on large GTs, but decided not to shoot. Later though, that decision would hang on my mind for hours and even days - was it a record? How big was it really?

I am glad to see that GTs have been removed from top level competition scoresheets, such as national and state titles, because over the years hundreds of these magnificent fish have been wasted at competition weigh ins, for nothing but a few extra points. With a lot of those GTs not even what you would call a meritorious fish - in the 10-20kg range. But for a fish to grow to 40kg it has to be smart, and tough, making it a serious challenge for most spearo's and their gear.

But would I shoot another one?...

Make sure you join in the discussion on the Adreno Spearfishing Facebook wall and let us know if you would have taken the shot if you had the chance?!?