The ocean sparkled as if covered in thousands of the worlds most precious diamonds as soft waves would rise up to meet the sun, it’s rays reflecting off each small ripple. It was going to be another perfect day on the water. But with Andrew’s GPS not working we were restricted to some of the more well known (read: fished out) spots. As we jumped into 25m of water Tim Neilsen, owner of Adreno, told me to stick to him “like glue” – and it didn’t take me long to figure out why! Within ten minutes we had spotted two 3.5m bull sharks cruising innocently below us. At that point I was happy to observe from the surface, the spot being too deep for me anyway. As the boys had fun shooting Australian record unicorn fish, some amberjacks, as well as Tim getting a great spangled emperor, I jumped back in the boat away from the watchful eyes of the sharks. 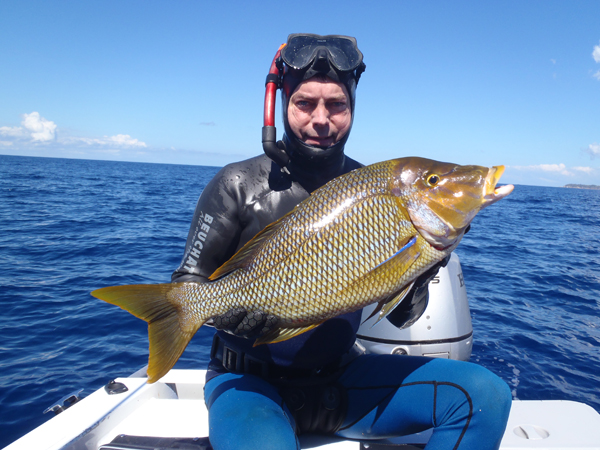 As I marveled at the surreal view though I saw Andrew’s float take off at a hundred miles an hour, dragging Tim’s along with it! I laughed at the sight as the guys tried to keep up with the floats and untangle them, being careful not to lose what was clearly a good sized wahoo! As soon as Andrew’s float was free it took off and he yelled out to me to keep an eye on it as he swam back to the boat. I nearly lost it a few times, the powerful fish dragging it underwater for a few seconds at a time. We eventually chased it down and the guys pulled in the awesome fish.

The area it had taken us to looked quite promising so we dropped anchor and jumped in. As always, I was last in the water. As soon as I jumped in though I spotted four wahoo following Andrew (he has mirrors attached to his DiveR’s – works a treat, except he only sees the fish if he happens to turn around!). I pointed them out to him but his gun was unloaded. They weren’t too bothered by my presence (obviously hypnotised by the shiny objects on Andrew) so I took aim and placed a near perfect shot between the largest of the four fishes dorsal and anal fins (I’ve been told this is the best shot to get on them as it is where the highest concentration of bones are and, being the third fastest fish in the ocean, a tail shot really slows them down – Andrew lands them with this shot every time). The fish took off and for a moment I was caught in a tangle of lines. “I got one!! I GOT ONE!!” I screamed. Adrenalin took over and I began to freestyle after my float. Unfortunately, there were a couple of bull sharks even more excited by the fish than me and they SCREAMED underneath me (I’ve never seen sharks move so fast!!!!!) intent on hunting down the already hunted wahoo. Doing a circle, the wahoo looped around the boat and then back under it and my float caught on the anchor rope! Andrew and I managed to unhook it and the wahoo was (amazingly) still on and pulling hard. But that brief stop must’ve given the (stupid stupid fat greedy) bull sharks enough time to catch up to it, and the wahoo was ripped from my spear…  Now I was mad :-(

There were still fish in the area though – a MASSIVE school of mac tuna powered through and Andrew got one in the boat for sashimi. There were also some good schools of Spanish, but the current had picked up and our float lines were wrapped around the boat. We called it quits for a bit and moved back to our original spot at sevens for a last dive.

After not long, Tim had landed a nice Spanish when Andrew came over with another wahoo! Ten minutes later, while I was day dreaming, I looked around to see a massive wahoo cruising by – Tim was already down and lined up on it. He pulled the trigger and the wahoo shivered as he shot it through the tail – stoned! Tim pointed out some more wahoo, but they were a little skittish. I turned in the direction they were heading and froze, being sure not to look at them, and sure enough they all turned around and cruised curiously towards me. I swooped down, lined up on the closest one, being sure to make my actions as slow as possible so as not to scare them, and pulled the trigger. It took off, but not very fast – I’d gotten a good shot and it was finding it difficult to get speed. “I got it…” I said, not quite as enthusiastic as the first time, well aware that a shark could steal it at any moment. I swam after it for a while but, with the images of greedy bull sharks still fresh in my mind, stopped and looked back at Tim. “What’s wrong?” he asked. I told him I didn’t want to swim by myself and he laughed and swam with me. 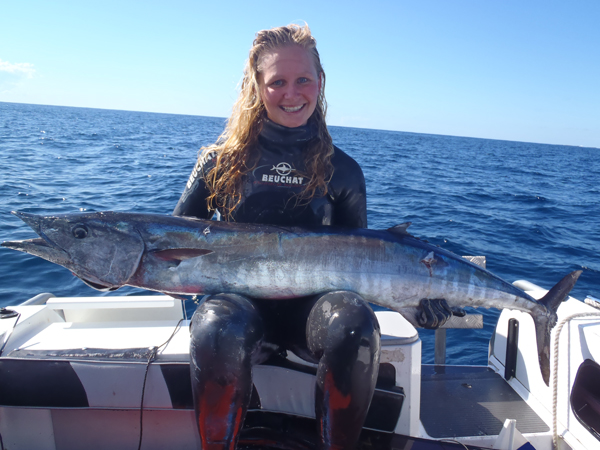 We chased the fish for what seemed like a veryyyy longggg time. I followed Tim’s instructions, pulling the line in softly but letting it go if it needed to run. I was getting one step forward and five steps back though as the fish wasn’t giving up. Eventually it looped around and I could pull in the slack line with ease. Tim passed me his gun to put a second shot in. I took a dive and stoned the fish, Tim giving me the thumbs up as I returned to the surface. Now that we were in the deep water of what seemed like the middle of the ocean, a kilometre away from the boat with a massive dead fish, news helicopters circling above filming groups of massive sharks devouring schools of bait – I was aware that losing this fish was the least of our worries! I had just taken Tim’s spear out of the wahoo when he yelled through his snorkel and pointed out a big shark that had snuck up behind me. I screamed, not really scared of the shark, but just not wanting to lose my fish! It swooped in, every muscle in its sleek body concentrated on the same thing as me – the fish. I pulled my catch in closer to me and could hear Tim reassuring me “it’s okay, you’re okay”. The shark had a couple more goes before realising we weren’t giving in and he resorted to circling us a few times before the boat arrived. “I’m watching your back”, Tim said as I swam to the boat, clutching my fish. Andrew took a photo of me as I pulled the 46 pound pending Australian womens record into the boat. Once it was over I was relieved and ecstatic – I’d done everything right and landed a fish that many guys still dream of – wahoooo!