I study law full-time and have an exam tomorrow that I should really be studying for… But I haven’t been able to stop watching a video my brother pointed me to (I posted it on the Adreno facebook page) and now I’m in the mood for some writing! So here’s a story about a couple of amazing trips I had earlier this week. The scenes have been playing over and over in my head – massive sharks, schools of bait, big fish and Australian records. Enjoy!

The first rays of sunlight peaked over the horizon as we jetted along the calm waters of Moreton Bay. Jayme-Lee, another Australian Ladies spearfishing champ, and I had been keen to get out together for a while so I was stoked when Andrew called me last Saturday to organise a trip for Sunday - and Jayme was free to come! With the Sunny Coast Skin Divers first comp for the year being held that day I was glad I’d be competing. We slept at Andrew’s house for the night to make sure we could get an early start.

We dropped anchor in 28m of water. A little deep for Jayme and I but a good opportunity for us to spot each other while we did some freediving. Andrew was in the water first and there was a resounding “wooooohoooo!” through his snorkel before he popped his head up “this is amazing! 40m vis!” he said. We jumped in and sure enough could see straight to the bottom! I took my first dive and was surprised that I got down enough to see everything – massive blue bars, an elegant eagle ray and bait fish galore. Andrew hit the surface, “there’s two Australian record maori cod down there!”. We watched him breathe up for 4 minutes, making sure he had plenty of oxygen for the deep dive. He was on the bottom for just a couple of seconds when I heard the unmistakable twang of rubbers and waited in anticipation as he ascended. Slowly but surely the monster cod came into view – stoned dead. We jumped back in the boat and it was time for some glamour shots before we headed into some shallower ground. 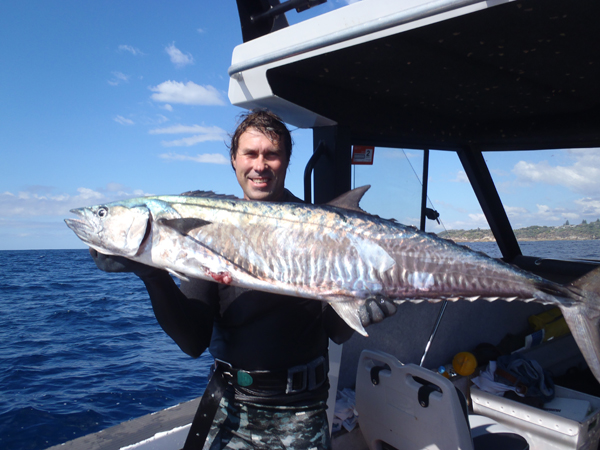 As I slid below the surface I couldn’t believe the sight! I had dived this area before, but never in visibility more than 5m and that made for some tough and scary hunting… it was a whole other world now though! Every fish, every ripple in the soft white sand, ever cave and crevice and movement in the distance was clearly visible! In fact, the visibility was at least TWICE as good as my local swimming pool. I felt like I was in an aquarium! Jayme and I stuck together as I’d left my dive knife in Sydney, so if I got a fish I had to steal hers. On her first dive, Jayme missed an absolute cracker of a moses perch. She’d been telling me she’d been trying to get the record for them for years! So she took another dive and sure enough landed one she could claim.

Jayme had swum about 30m away now and was with Andrew when I spotted a nice maori cod lurking below. I took a dive, lined it up and pulled the trigger – got him. But I hadn’t stoned it and I didn’t have a knife. Knowing we were in a sharky spot I started yelling out to Jayme to borrow her knife – of course, she couldn’t hear me. I glanced back down at my new PB maori cod just in time to see the fattest bronzy I have ever seen swoop in for an opportunistic feed! I yanked the fish out of his path of attack. This seemed to agitate him and the shark swopped back around for another go. I pulled the cod closer to me and popped my head back up, now screaming out “JAYMEEEEE!!”. Andrew popped his head up this time. “I’ve got a cod… and a shark!” I said. “huh? Dart?”, he replied. I looked back down but, as quickly as the shark had come, it was now gone…. I looked around but it was no where to be seen. Geez they’re quick, I thought. I still had my fish and borrowed Andrew’s knife to spike the new Australian womens record maori cod. As I fiddled with the fish I spotted a few good sized Spanish mackerel not far away and Andrew managed to land one. We swam on and I eventually saw some more. I took a dive, lined it up between its two fins where I’d been told to shoot them, and pulled the trigger. It took off but my float line was caught around a weight on my belt! The line pulled tight and the Spanish escaped – arghhh. I was later told that I need to get some Adreno weights – they’re streamlined to your body so that nothing can catch on them. Such a simple invention could save your life or at least stop you losing a good fish! 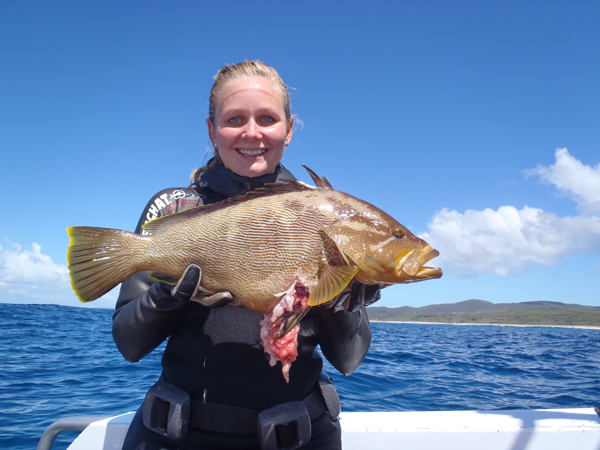 Jayme wasn’t feeling too well and we headed back to the boat. Andrew and I jumped in at another spot where I as able to land a nice stripey sea perch, moses perch and grouper. I could’ve gotten so many more fish that day but I would get to the bottom and see SO many different species that I’d spend all my time swinging my gun around thinking “blackspot tusky! Oo venus! Wait, goldspot wrasse!” and then come up with nothing because I’d run out of air! I’ve learnt my lesson now on being picky.

After 6 hours of diving my left ear blocks up and becomes near impossible to equalise, so my day was over. After Andrew collected some crays for dinner we stopped in at one last spot. Andrew said it’s usually crawling with large bull sharks – so I was happy to stay in the boat with Jayme! After a while in the water though he yells out that he’s got a wahoo and I tell Jayme I’m going to jump back in and check it out, having never seen one in the water before. As I made my way over to him he began yelling frantically and I picked up the pace thinking there was a shark bothering him. But as I approached I noticed ten wahoo circling him, close enough to touch! They were covered in beautiful stripes, their fins fully extended across the length of their body as they eyeballed us curiously – by far the coolest fish I had ever seen! Unfortunately, having left my weight belt in the boat, today was not my day to land one – but I did upgrade them to the top of my hit list!

Keep a look out tomorrow as we upload Day 2 of this epic week and I land my first wahoo!