I was at my local pool last Tuesday night and noticed a group of underwater hockey players. Since moving further up the coast at the beginning of the year, I've been too far away from Chandler to be able to play hockey so I was pleasantly surprised to see a group training so close to my end of town!

I had a chat to them and they were all completely friendly. Despite their teams being in training for this years Underwater Hockey State Titles, they were more than happy to lend me a hockey stick so that I could join in on their game for the night. 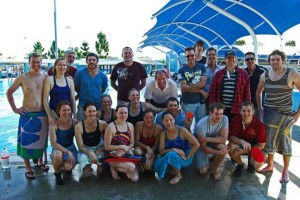 I had my new Contour camera in my bag and I quickly strapped it to my mask to get some footage of the game as well.

So if you have ever wondered what a game of underwater hockey looks like - take a peek!