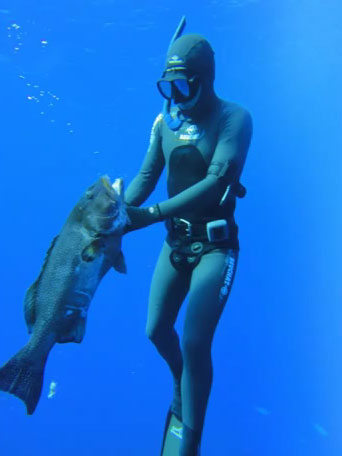 Its about this time of year that the weather starts to get a bit shitty up North due to the South Easterly Tradewinds. Usually its a week or two of 20-25 knot winds with about 3-4 good days of calm weather in between.

This being said though if you can get the weather right or have the flexibility to fly up last minute, the Spearing is unbelievable!!

The visibility usually clears up to about 20-25m and the Spanish are so thick, you literally have to stop shooting them!! The reef spearing gets a lot better as well with water temps dropping and bottom species such as Large Red Emperor, Nannygai, Emperors and Coral Trout coming up into water as shallow as 10m.

Below is a video from a day out last winter where my mate Brad and I shot 5 Spanish including 3 in 5 minutes. We decided 5 was plenty and spent the rest of the day watching another 20 swim by....