This blog post is brought to you by Noob Spearo Podcast.

Entering the water Kimi Werner had some trouble with her dive mask and was reaching up to fix it. As she was distracted by her mask, a huge silhouette glided past quietly behind her. Her dive buddy alerted her to the fact and she quickly ducked below to inspect the mysterious visitor. 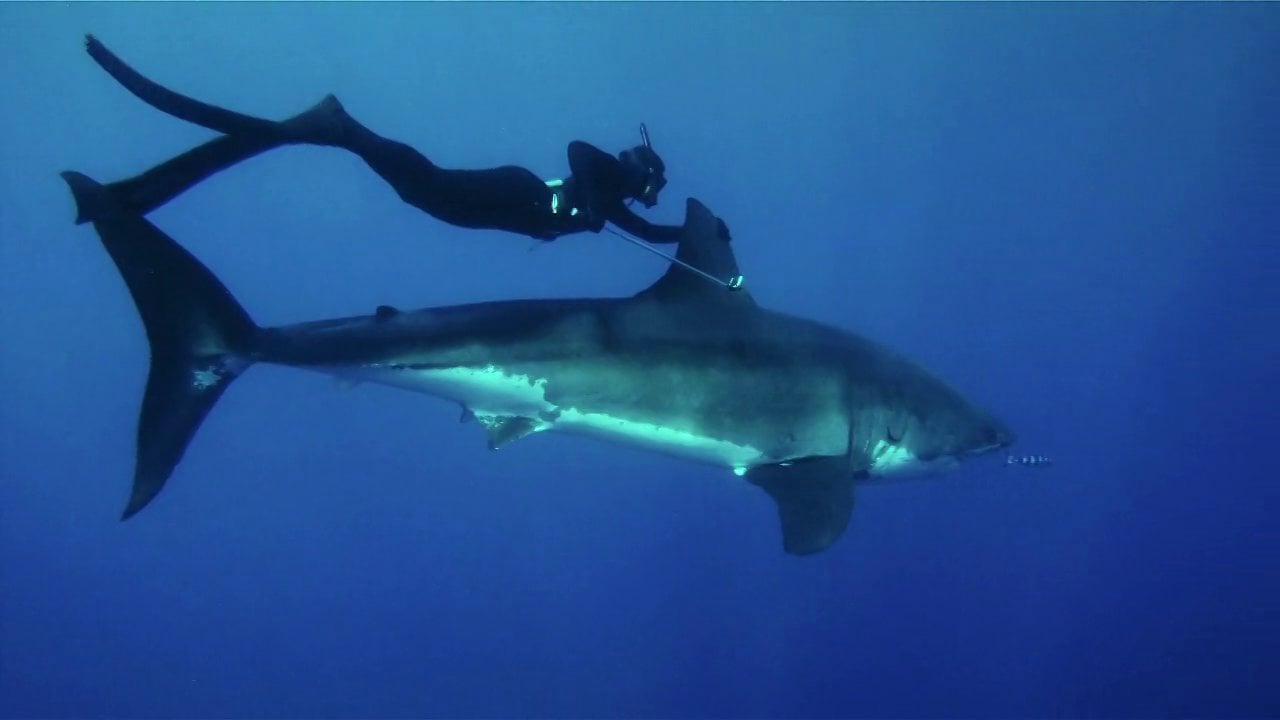 Kimi with the Great White Shark she encountered

That’s when she realised it was a 17ft Great White Shark. You would expect this to be a ‘poo meet neoprene’ moment but right when the flight or fight response triggered, Kimi chose to pause and respond in a different way. Calmly and confidently Kimi observed, analysed and responded to the big female White's behaviour in an hour long encounter. This experience helped Kimi to realise that often we should respond differently to the way we feel pressured to respond.

In her TedX talk  she identifies this ability to respond rather than to react as something unique that spearfishing teaches to those who practice it. I thought this was a phenomenal insight and after thinking about it I realized that it’s something that we all learn after a while chasing fish. In our recent interview with Kimi she identifies some of the body language she adopted in specific circumstances and I learned from her story.

Spearo’s in my experience are far more knowledgeable about sharks than many professed experts. We encounter them regularly, we see them in their natural environment without burley or cages, we can sometimes be in competition with them when we have wounded fish on the ends of our spears, and we spend lots of time in the water without scuba tanks and noisy regulators so they often come closer. For these reasons many spearo’s have special insight into shark behaviour.

When you are beginning to hunt fish species there’s an excitement you must learn to contain in order for fish to come close. Adopting the right body language in the water is often the difference between fish in the esky or going home with nothing to put on Facebook. Likewise when you are in the water, identifying sharks body language and knowing how to respond is crucial. In a hunting situation adopting innocuous body language can be best but when you are dealing with a large predator, perhaps adopting more confident, upright and determined body language can help you to deter their predatory instincts. 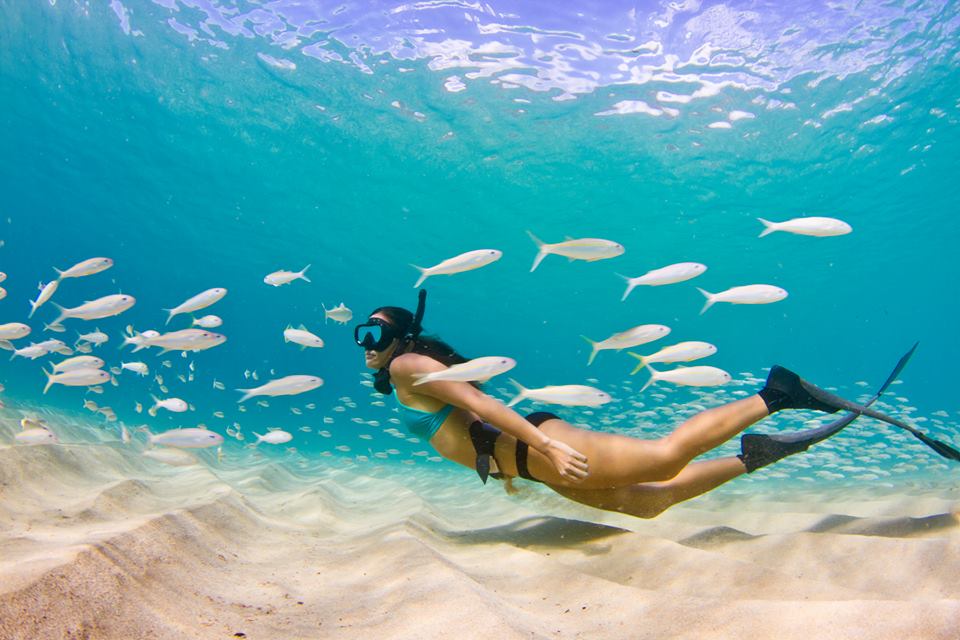 Identifying a shark’s mood is the first step in dealing with them as spearo’s. Although they can be unpredictable and hard to judge (the younger ones particularly) learning a few of their postural cues can help you to make better decisions. A shark that is going to attack will (usually) have sharp, fast movements and it’s posture can be hunched up. Likewise a lowering of the pectoral fins and moving up and down the water column quickly can indicate a dangerous mood.

Some spearo’s compare sharks to dogs and point to some of the similarities. Like dogs sharks use body language to assess and assert dominance. For example this article shows that Great White Sharks (GWS) will swim next to one another to compare size and establish rank, and it is the submissive shark who will turn away. There are many examples of these types of behaviours and perhaps sharks use this behaviour on us before deciding whether to attack or not. This could explain why sharks and large Great Whites in particular will hang around people spearfishing for long periods of time without making any seemingly aggressive moves.

Last year Adreno’s Trevor Ketchion was the subject of some criticism following his encounter with a GWS. The large shark was approaching his dive buddy from underneath, so he gave the shark a hard poke behind the head to discourage any further inspection. A few well-meaning but poorly informed viewers of the video accused him of animal cruelty. Little did they know that a spear poked into a great white is a bit like poking an elephant with a straw. Trevor said in a later interview that the goal of a spearfisherman in this situation is to communicate to the animal that you are not completely defenceless and perhaps there are easier meals elsewhere. 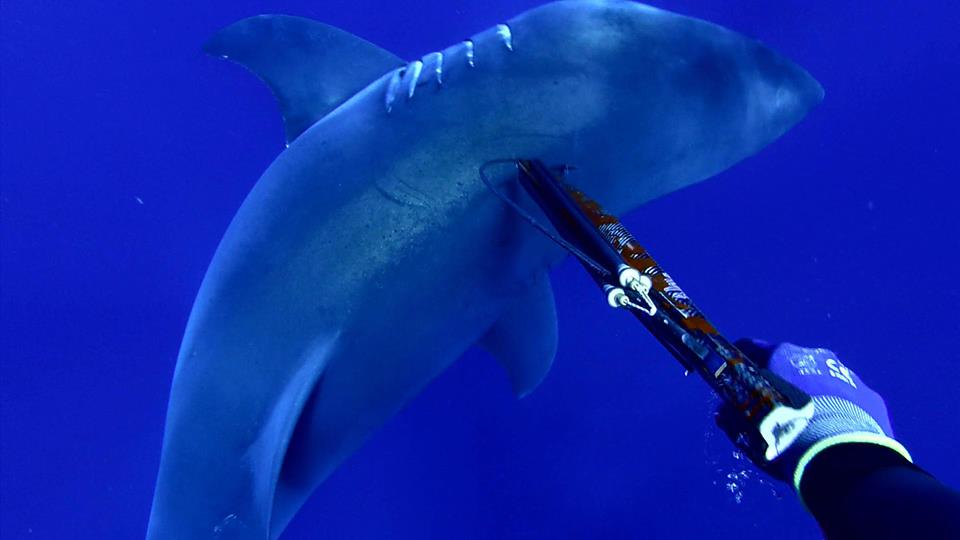 Usually sharks are not a major issue however with attacks and near misses becoming more prevalent some strategies to deal with them in the water are something to think about. Instead of reacting, respond as Kimi identifies in her TedX talk using her great white shark encounter as an example. Sometimes this might mean leaving the scene, especially if you think the shark or sharks are a danger to you or your dive buddies.

Learn to identify and recognise behavioural cues from the shark and have an agreement with your dive buddies about how to respond to sharks. Remaining close to one another is crucial. Your dive buddy is your only safety equipment, this is true in the event of a blackout or shark issue. Be a good buddy. Some basic signals and back to back work can ensure that you and your buddy get home with all your limbs.

If you would like to hear a bit more about body language and spearfishing listen into our interview with Kimi Werner here. She discusses some funny crossovers between life and spearfishing in a lively chat we had recently.